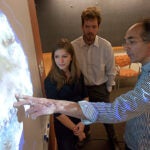 Ice sheet in peril? Gravity to the rescue

The EPA’s aggressive work to clean up the environment during the Obama administration’s first two years has made it a target for the ire of some Republicans, Jackson said. But she argued that the same voters who put those Republicans in office also approved numerous ballot measures protecting the environment in their home states.

“No candidate ran on a promise to put more pollution in our air and water, and no one was sent to Congress with a mandate to increase health risks for our children,” Jackson said.

Jackson was the keynote speaker in the School’s Ames Courtroom during an all-day conference marking the 40th anniversary of the EPA’s creation. The event was sponsored by the Harvard University Center for the Environment (HUCE), the Law School, the Harvard Kennedy School (HKS), and the Harvard School of Public Health (HSPH) . Among the speakers and panelists was former Vice President Al Gore, who addressed the luncheon.

Jackson said that the EPA has been aggressive under her leadership but that critics who argue that environmental protection and economic development can’t coexist are wrong. Despite repeated predictions of economic doom from industry groups when significant protection legislation has been passed, those industries have endured and the economy has continued to grow. In fact, Jackson said, regulations have provided the inducement for innovations such as the catalytic converter, replacement chemicals for ozone-killing chlorofluorocarbons, and an industrial sector dedicated to producing “green” products.

“President Obama has insisted that the choice between our economy and our environment is indeed a false choice,” Jackson said. “We’ve been more than happy to prove him right.”

The EPA’s past successes have provided a series of environmental protections that the public would be loath to part with, Jackson said. Among them are removing lead from gasoline and the air, reducing acid rain, providing the scientific foundation for secondhand-smoke regulations, cleaning rivers and water supplies, halting the widespread use of the pesticide DDT, increasing vehicle efficiency, and controlling toxic substances.

One of the more contentious challenges lying ahead involves action on climate change. A 2007 U.S. Supreme Court decision in Massachusetts v. EPA cleared the way for EPA action on such change under the Clean Air Act. The case determined that carbon dioxide and other greenhouse gases emitted by vehicles are indeed pollutants and therefore subject to EPA regulation. In 2009, the EPA released an “endangerment finding” under the Clean Air Act, saying that greenhouse gases can threaten public health and the environment and that emissions from motor vehicles contribute to air pollution that endangers public health.

One of the panels explored the ramifications of those actions and the extent to which the EPA can regulate greenhouse gases without major climate change legislation, which is stalled in Congress.

Perciasepe said that with more sweeping climate change legislation stalled, there are still actions that can be taken under the Clean Air Act to address the emissions of greenhouse gases.

“If we can’t do the big thing, we should do something, and the Clean Air Act is a way to do something,” Perciasepe said.

The EPA already has taken other steps, such as the Energy Star appliance program, to use less fuel — and thus emit fewer greenhouse gases — through efficiency.

Freeman said that a piecemeal approach that fully uses the executive branch’s powers to make rules and regulations under existing laws, such as the Clean Air Act, and that takes advantage of state and local efforts to fight climate change could actually make significant reductions. That goal would require, though, that multiple efforts on many fronts all be successful, she said, even in the face of opposition lawsuits and moves in Congress to weaken or block action through legislation. One unsung but critical strategy will likely involve “playing defense” against current and future action in the courts and Congress, Freeman added.

While those actions could help the nation reach interim greenhouse gas reduction targets, the only way to reach long-term goals, Freeman said, is to pass more comprehensive climate change legislation.