Quashing a voice, attacking a Nobel 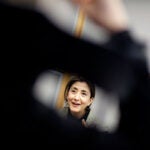 When Chinese government officials heard jailed Communist Party critic Liu Xiaobo was on the short list for the Nobel Peace Prize, they wasted no time in lobbying the Norwegian prize committee to reconsider. When Liu was named the recipient in October, China censored the announcement, blocking Internet searches and text messages that included Liu’s name.

And on Dec. 10, at the Nobel ceremony, Liu was represented not even by a family member or colleague — all of whom were barred from traveling — but by an empty chair, marking the first time since 1936 that a Nobel Peace Prize had gone physically unclaimed.

“Sometimes it looks ridiculous,” Bao said at a talk at Harvard on Dec. 15, citing China’s new Confucius Peace Prize, an attempted counterweight to the Nobel.

But China’s response has less to do with provoking the international community than with maintaining appearances at home, Bao told the audience gathered in the Center for Government and International Studies building. The Chinese government has its “own internal reasons.”

Bao’s lecture, “The Nobel Peace Prize and the Future of Political Reform in China,” argued that the controversy surrounding Liu is part of China’s larger campaign for “moral authority” in how it governs its 1.3 billion residents. The event was sponsored by the Fairbank Center for Chinese Studies as part of its China Lunchtime Seminar series.

The backlash against Liu, Bao said, is based on the “myth” that China is at ideological odds with the West. While China has embraced liberal economic reforms, the ruling Communist Party has not tolerated Liu’s outspoken support for Western democratic values.

In reality, he said, China’s current political and economic system is untenable because “the state and the people who control the state control all the economic resources.”

Bao argued that Liu’s prescriptions for China address social problems the government already recognizes, including poverty, standard-of-living disparities, and the lack of a social safety net.

But China is still reluctant to acknowledge dissenters such as Liu, Bao said. Liu is currently serving his fourth prison term for speaking out against the state, an 11-year sentence handed down last year after a two-day trial. Recent editorials from state-run news agencies have bashed Liu as an unpatriotic criminal guilty of slandering his country’s leaders.

Bao said that most Chinese intellectuals share Liu’s beliefs, but that only the vocal few who take the party line on Liu have made their opinions known in public.

“You cannot trust some of the academics in China,” Bao said. He cited a joke about dishonest Chinese scholars: If the party asked them to prove that one plus one is one, “they’ll say that one egg plus one sperm, 99 percent of the time, produces one child. So, in biology, one plus one is one.”

“This is exactly what Chinese scholars have been doing on this,” Bao said of the Nobel backlash within China, which has included a prominent critique that Liu supports American imperialism and advocates for radical westernization.

“Many people are deprived of any information about Liu Xiaobo because he is censored on the Chinese Internet,” Bao said. “They’re looking for these kinds of signals from the elites, what they believe. And the elites are not giving them the right signals.”

Still, he said, the Nobel has had “a huge educational effect” in China and Hong Kong. According to recent American media reports, which Bao confirmed, very few Chinese had even heard of Liu, a literary scholar and dissident since the 1980s, before the prize was announced.

“Because of the Nobel Prize, every day that he spends in jail will be a liability for his jailers,” Bao said.