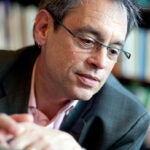 Making sense of the truth

Carson McCullers and singer/songwriter Suzanne Vega have more in common than it might first appear.

Both are storytellers who have weaved vivid tales and share a musical connection. Vega is a well-known artist who penned the ’80s hit songs “Luka” and “Marlene on the Wall.” McCullers, a Southern Gothic author popular in the ’50s who wrote “The Heart is a Lonely Hunter,” once hoped to study piano at the prestigious Juilliard School of Music in New York, but reportedly lost her tuition money. There is a physical resemblance between them; each has wide eyes, a slim build, and an ethereal, waifish quality.

Now Vega is working on McCullers’ life story as she prepares a musical theater piece about the troubled author, who died in 1967. “Carson McCullers Sings About Love” is part of Vega’s weeklong Harvard residency Dec. 2 to 9, which is co-sponsored by Arts @ 29 Garden and the Office for the Arts at Harvard (OFA).

Vega is collaborating with director Kay Matschullat ’77 and musician Duncan Sheik on the project, which is scheduled to premiere at New York City’s Rattlestick Playwrights Theater next April.

The three talked about their work and the collaborative process during a discussion Thursday (Dec. 2) at Harvard’s newest art space. Arts @ 29 Garden is a new initiative born out of the University-wide Arts Task Force that two years ago called for Harvard to further integrate the arts into University life. The new space is aimed at promoting creativity, collaboration, art making, and experimentation.

Part of the goal of Arts @ 29 Garden’s new salon series, Salon @ 29 G — which will be held the first Thursday of each month — is to help the activities taking place in the space become accessible and transparent to the undergraduate population. Thursday’s salon session was co-hosted by the OFA’s Learning From Performers program, an initiative that aims to “bring artists into the orbit of students and the University, and to have a dialogue about the arts and about the creative process,” said Tom Lee, the program manager for Learning From Performers, who introduced the event.

In addition to chatting with the audience and taking questions, Sheik and Vega performed haunting songs from their upcoming show that had catchy guitar tracks and lyrics dealing with misfortune and inner strength.

Vega said she first read one of McCullers’ short stories of unrequited love while a teenager, and found its language modern, “blunt, and honest.” It was only later that Vega learned that “Carson” was a woman, one who looked like a “very wise, old, little girl.”  Vega felt so connected to McCullers that she knew if she ever were to play a character, “I would play her.”

At Barnard College, Vega completed her senior thesis on McCullers and worked on a screenplay about her, which became the underpinnings of her current project. The work is based on McCullers’ fixation with a profound “love for humanity,” what Vega called “the most attractive thing” about McCullers’ life.

As Vega’s collaborator, Sheik said he offers up little “seedlings of music,” pieces of tunes that he has conceived, which he then turns over to Vega, who crafts them into full-fledged songs. Vega then sings back what she has created to him, and they polish them together.

Sheik, whose single “Barely Breathing” topped the pop charts in 1997, said his own experience with musical theater was a long, somewhat begrudging road. He said musicals were “completely not my cup of tea,” but he nonetheless agreed several years ago to help an unknown playwright friend write some music for his show. Later the friend suggested Sheik consider helping to adapt a controversial 1891 German play dealing with teenage sexuality, “Spring Awakening,” into a musical. Sheik worked on the project for several years, staying true to his musical aesthetic, and the show became a box office and critical smash.

“If I had known that it was ever going to take that long, I don’t think I ever would have done it,” said Sheik, adding, “I am realizing now that is not atypical.”

He urged students interested in musical theater and production to “find the resolve to create the idea yourself,” instead of working on shows pushed by big corporations that often own the rights to works that wind up being “made by committee.”

Freshman Allen MacLeod, who recently finished his first production with the Harvard-Radcliffe Dramatic Club, “Death and the King’s Horseman” by Wole Soyinka, and who hopes to study acting, said the talk offered students an important opportunity to interact with professionals.

“It’s very cool … to meet the people who create,” he said.