Art in the making 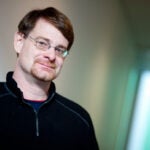 The landscape of slavery

Model of ancient Barberini Faun ‘a rare and precious survivor’

One example is a fragile plaster model — 34 inches high — that is a rare survivor from the rough-and-tumble sculpture studios of 17th century Italy, where new sculptures were made and ancient classical works were restored from fragments dug from the ground. Young artists often learned their trade by piecing these remnants together.

Restorations required making plaster models, three-dimensional representations of what a finished work might look like. They were just templates of a sort, and were discarded once a sculpture was finished.

But the half-scale example somehow survived and was donated to Harvard last year by the estate of First Amendment lawyer Daniel Paul ’46, a one-time member of the Harvard Board of Overseers who had a passion for collecting fine art. (He also earned degrees from Harvard Law School and from what became the Harvard Kennedy School.)

The survival alone of such a fragile artifact makes it rare. But what makes Harvard’s model even more important is the figure it depicts: the Barberini Faun (circa 220 B.C.), one of the key works of Hellenist sculpture in the canon of Western art.

The original, a life-size marble statue on display in Munich since 1830, shows a reclining, naked faun — in Greek mythology, a satyr — in what one critic called “the relaxed abandonment of sleep,” with legs akimbo, and one arm crooked behind a head wild with curls.

That abandonment includes a full frontal view of the faun, a pose that has since made the statue an icon in homoerotic art. The same legs-apart view also assured that for years the Barberini Faun appeared in art textbooks only as a detail of a handsome, relaxed face.

Stephan Wolohojian was shocked when he saw the original, in Munich’s Glyptothek museum. The blatant naked pose was part of the shock, he said, but so was the naturalistic beauty of the statute’s musculature and “the seductive trance of the sleeping faun” itself.

Wolohojian is the Landon and Lavinia Clay Curator, and head of the division of European and American Art at the Harvard Art Museums. He delivered a talk on the Faun plaster model this month (Dec. 8) at the Arthur M. Sackler Museum lecture hall.

It was the second of four In-Sight Evenings at the Art Museums, in which patrons are invited to an after-hours reception and then talk that looks “deeper and differently” at a single artist or work of art.

The story of the plaster model starts with the story of the Barberini Faun itself, which in the 1620s was excavated in Rome. More than a thousand years before, it had likely been among the tons of statuary hurled at invading Goths from the heights of the besieged Castel Sant’Angelo, a papal fortress. In ancient times the fortress had been the mausoleum of the Roman emperor Hadrian, an ardent Hellenophile who scoured the empire for Greek statuary.

When it was dug out of the old moat, the Faun was missing its right leg and left arm, as well as fragments of the face, hand, and elbow. By 1627 it was in the possession of Cardinal Francesco Barberini, a cousin of Pope Urban VIII, an arts patron who himself was a Barberini.

By 1629, marble had been purchased for a restoration. A 1679 letter refers to “making two legs in stucco and plaster,” and by 1692 another Barberini inventory refers to a sitting, sleeping Faun, and a plaster model.

All the evidence points to the Harvard model being “a working model,” said Wolohojian, and not a cast for reproduction. It was the kind of working object made of clay, rope, and other handy material that “rarely survived in a chaotic sculptor’s studio,” he said. “This plaster is a rare and precious survivor.”

Such models, of course, were never presented to large audiences, said Wolohojian. So the Harvard example, complete with a piece of bone inside used to strengthen the right leg, is a window onto restoration work of centuries past.

The Harvard Art Museums own a similar artifact — a low-fired clay model of St. Longinus (1628) that has been in the collection since 1937. It is by Gian Lorenzo Bernini, a favorite of Pope Urban VIII and the leading sculptor and architect of his day. (He designed the Piazza San Pietro in front of St. Peter’s in Rome, as well as the interior of the Basilica. His “Apollo and Daphne” and other works have been widely admired for almost four centuries.)

“It would please me to think … that there was a Bernini intervention” in restoring the Barberini Faun, said Wolohojian, but there is no evidence of it.

The original was “the envy of popes and princes,” he said, and it underwent serial restorations. A full-scale marble copy done in Rome in 1726 shows the restored right leg in an upright position, as it appears in the Harvard model.

But the most famous restoration — by Italian sculptor Vincenzo Pacetti, in 1799 — replaced the right leg once again, skewing it outward to expose the buttocks more dramatically.

The Pacetti restoration also “imposed the single frontal viewpoint,” said Wolohojian, an imposition of artistic design that today would be called a “mutilation.”

But that was the business of restoration in 17th and 18th century Italy, when sculptors had a virtual license to rework classical fragments as they saw fit, he said. “Artists felt a certain freedom, a certain liberty to respond” to the materials in front of them.

Such manipulations were “clearly acceptable” to audiences a few centuries ago, said Wolohojian. Fragments of ancient marbles were sought out to make modern works, he said, and restorers would often integrate fragments of old sculpture to make new ones, like using parts from a bin.

Today, “most of us admire classical marbles” on display, often without considering what restorers just a few centuries ago might have done with their “unions of ancient fragments.”

After a brief round of questions, Wolohojian invited the audience to ask more “over some wine” at the reception following the lecture. “Appropriate,” he added, “for thinking about a satyr.”

The topic of the next In-Sight Evening, at 6 p.m. March 9 at the Arthur M. Sackler Museum, 485 Broadway, is the statue of Meleager. This stunning fragment of heroic Greek sculpture has been on display at Harvard since 1899.  For more information.