Administrator by day, singer by night 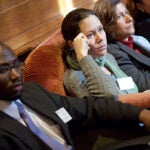 By day, Karen Woodward Massey bounces through the halls of the Faculty of Arts and Sciences’ Research Administration Services, tackling projects with an energy and presence that belie her petite frame.

But on Dec. 2, Massey’s co-workers saw a decidedly different side of the woman whose indefatigable networking skills have earned her the nickname “Julie the Cruise Director,” after the “Love Boat” character Julie McCoy. As Massey skulked around a stage at the Queen’s Head pub, snarling the lyrics to Jefferson Airplane’s “White Rabbit,” the research administrators’ holiday party took a turn toward the psychedelic.

“I like the darker songs,” Massey said with a laugh. “My inner addict comes out, and I get to do a little acting.”

For years, acting was Massey’s primary creative endeavor, but her current position as director of education and outreach does not leave her time to hustle for roles. Luckily, she’s found another outlet: singing and playing alto saxophone in the Grateful Deadlines, a longstanding, ever-evolving rock cover band whose lineup includes five of her Harvard co-workers, a research administrator from Northeastern University, and a drummer from South Boston.

Lugging the band’s equipment to Watertown on weekend mornings and practicing for hours might seem tiring after a long workweek, Massey said, but “I always end up with more energy than when we started.”

Their recent performance helped to bring the University’s other research administrators — a group not known for their hard-partying ways — out of their shells, too.

Helen Page, director of research administration at the Harvard Graduate School of Education, kicked off her shoes and shimmied to the band’s renditions of the Beatles’ “I Saw Her Standing There” and Wilson Pickett’s “Mustang Sally.”

“I’m a big fan of the Grateful Deadlines,” Page said. “Karen really brings it together with the female vocals.”

For all her apparent ease on the stage, Massey also gravitates toward her numbers-driven work. As a research administrator, she and her colleagues help make research possible at Harvard by helping professors apply for grants, track funding, and ensure that their studies comply with regulations.

“It’s fun, because there’s always something new to learn,” Massey said of the complicated world of University research. “In a perfect world, we support our faculty so they don’t have to deal with the bureaucracy and can concentrate on the research.”

Massey ended up at Harvard by chance, landing a job at the Harvard College Observatory through a temp agency after she graduated from Wellesley College in 1990. What started out as a day job to support her acting career became a career in its own right, as research administration evolved into an in-demand profession. In the years since, she has had a variety of jobs both at Harvard and in the acting world.

For several years, Massey worked part time at Harvard while serving as financial director of Out of the Blue, a theater company that she co-founded in 1992. In 2000, spurred by a successful commercial, she quit her day job and began acting full time. (Ironically, the nationwide television ad was for a dot-com-era website called Jobs.com.) She acted locally in theater, voiceover, television, and film, and traveled nationally with the Underground Railway Theater for children.

In 2002, she returned to Harvard and has since worked in grants manager roles at the Harvard School of Engineering and Applied Sciences and at the observatory. In 2006, she realized she wanted to teach, and has slowly carved out her current role overseeing education, outreach, and career development projects at Research Administration Services.

“When I came to Harvard, I didn’t know anything about research administration, but I was able to progress so far,” she said. “I realized I want to help other people do the same thing, and a big part of that is giving them the information, systems, and education to be able to do what they need to do.”

Between her current job — which involves leading workshops around the University — and her gigs with the Grateful Deadlines, Massey still frequently finds herself in front of an audience.

“Having that creative side really helps,” she said. “I’m not as good when I just concentrate on the practical stuff. I need to have a mixture of both.”

She’s hardly the only Harvard employee with an unexpected avocation.

“That’s the coolest thing about working at Harvard,” she said. “There are so many people who surprise you. Once you scratch the surface you find such a treasure underneath. It really makes it fun to get to know people.”