A look inside: Kirkland House 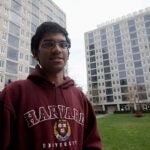 In search of Captain Nemo

Within the dark-paneled Junior Common Room of Kirkland House, comedic duo Peter and Bobby Farrelly, the masterminds behind the teenage hilarity in the films “Dumb and Dumber” and “There’s Something About Mary,” entertained a crowd recently as part of the popular series “Conversations with Kirkland.”

The series, started by Kirkland resident scholar Peter Emerson in 2002 and co-sponsored by the Office for the Arts, featured the New Englanders from Cumberland, R.I., who were introduced as the “renaissance men of comedy” by program coordinator Iris Lee ’12.

The brothers, a year and a half apart in age, rapidly fell into a natural, humorous banter, a trait they have shared since childhood. They recounted a short history of their failures locally and a move to Hollywood, and they chalked up much of their success in Tinseltown to their sibling bond.

Peter explained that having a brother with you to “fend off the studio” gives them a huge advantage. Having “a brother who is your partner,” he said, “who you also know has your best interests — he’s never going to hurt you — it’s a great thing.”