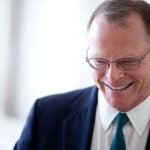 The measure of the man

Suffering is “one of those things that defines the human condition,” Arthur Kleinman told a gathering at the Harvard Faculty Club.

More than a year ago, Kleinman, the Victor and William Fung Director of the Harvard University Asia Center, and David McCann, director of the Korea Institute and the Korea Foundation Professor of Korean Literature, discussed organizing an Asia-focused symposium in response to Harvard President Drew Faust’s 2008 Civil War book “This Republic of Suffering: Death and the American Civil War.”

Kleinman and McCann’s conversation culminated in a Harvard panel on Friday (Nov. 5) with a collection of scholars who discussed the history, politics, poetries, prose, and anthropologies of suffering in Asian societies.

In exploring examples of the literature of suffering, Karen Thornber said Chinese works on the Nanking Massacre, Korean writings about the Korean War, and Japanese prose and poetry dealing with the atomic bomb “graphically depicted the anguish of both soldiers and civilians, of both the living and the dying.”

Like Civil War survivors, those who lived through the aftermath of the atomic bombings also found themselves in an “incomprehensible universe,” said Thornber, assistant professor of comparative literature. That sentiment, she noted, is revealed in the writings of the time.

Sankichi was 24 and only three kilometers from ground zero when the bomb fell. He died at age 36 of leukemia, a disease believed related to his exposure to the blast’s radiation. His words, said Thornber, suggest that, like so many survivors, he felt “physically alive but psychologically obliterated.”

Offering another perspective, Mark Elliott, acting director of the Fairbank Center for Chinese Studies, and the Mark Schwartz Professor of Chinese and Inner Asian History, compared the Civil War and its legacy of suffering to that of the Taiping Rebellion, a brutal Chinese civil war from 1850 to 1864.

Like the American Civil War, it was waged between rebel forces in the south and a northern government trying to preserve its union, and had a staggering death toll. But the conflict, Elliott argued, “is not part of the national discourse of suffering in modern China,” compared with the second Sino-Japanese War, or the Cultural Revolution.

Still, he drew comparisons between the two conflicts. Referencing a point in Faust’s book that “Death created the modern American union,” Elliott said the Taiping Rebellion “led to radical restructuring of imperial societies and politics that contributed to the emergence of a republic.”

Of Japan’s efforts to cope with the fact that its involvement in World War II is “largely reviled,” Susan Pharr, director of the Edwin O. Reischauer Institute for Japanese Studies, said, “It’s important to understand how crushingly difficult the task is.”

Besides needing to express grief for those who lost their lives, communicate a sense of contrition, and recover a sense of self-esteem, Japan has to work to find meaning to the conflict to help future generations understand that the suffering was not in vain, said Pharr, Edwin O. Reischauer Professor of Japanese Politics.

While she acknowledged one could fault Japan for its failure to deal effectively with the past, the task, she said, is “extraordinarily complex.”

Adding a psychological dimension to the discussion, Kleinman suggested that painting the concept of suffering with the broad brush of trauma theory — the notion that all suffering results in emotional trauma that leads to long-term buried memories with negative consequences — is not necessarily the correct approach.

Citing research from a forthcoming book in which he studied those traumatized by China’s Cultural Revolution over 30 years, Kleinman, who has done extensive work on mental illness in Chinese culture, said many of his subjects had decidedly different long-term responses to trauma.

“What one sees is a weakening over time of the bite and sharpness of the most difficult of memories, a reworking of memories, and then a sense of increasing balance, a balance between where memories should be and where both the current period and the future lies.”

Partly in play is the notion that over time, “Different contextual settings radically change the subjective experience of the past.”

Kleinman compared studies in which Holocaust survivors are placed in a laboratory setting and encouraged to recount their memories, versus what happens to them in their daily lives. When examined in an everyday context, the trauma and the memories are not gone, but “reinterpreted and reworked,” he said. “The consequence is that people are able to get on with their lives.”

Besides being Harvard’s president, Faust is a Civil War scholar and the Lincoln Professor of History. Her book examines the culture spawned by the unprecedented fatalities of the conflict.

Faust came to study the Civil War in large part because of her graduate training, which inspired her interest in researching history from “inside the experience” of people in a culture. In addition, she said, she realized that the literature on the Civil War had essentially neglected the topic of death, what she called “an essential part of the …  experience.”

“The Civil War, I came to understand, is a significant and transitional moment in the way human beings have related to suffering,” said Faust, who said that many participants in the conflict felt they had elevated the concept of suffering to a “higher level,” one that led to a more humanitarian age and the rise of abolitionism, human rights doctrines, and even the movement against cruelty to animals.

“They were aware of a shift in the human condition, in which suffering was seen as terrible, intolerable — not just as a condition of life, but as something that should be resisted.”