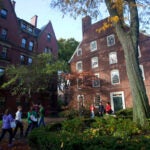 José Rosado has spent the past three decades in the basement of Harvard’s Museum of Comparative Zoology with more than 300,000 formerly crawling, slithering, snaking, swimming specimens. And he couldn’t be happier.

“It’s interesting to get paid to do something you love so much,” said the museum’s longtime curatorial associate in herpetology, who oversees its collection of amphibian and reptile samples, as well as two live lizards and a boa.

As a child growing up in East Harlem, N.Y., Rosado loved animals and spent his free time in New York’s American Museum of Natural History. He admired the museum’s scientific staffers clad in white lab coats, and determined to become one of them. And he did.

After studying biology at City University of New York, Rosado went to work in the Museum of Natural History’s herpetology department. When a job opened up at Harvard three years later, he applied, was offered the spot, and has been at the University ever since. He knows the Harvard collection inside and out and is passionate about every last Sphenodontia and Lissamphibia.

“This is knowing what’s out there. This is fascinating, this is science,” he said, showing off the dermal bones fused to the scales of an Australian crocodile skin, which provide the animal with natural armor.

He also knows that many of his creatures wouldn’t win any beauty pageants. The alien visitor from the Steven Spielberg 1982 smash hit “E.T.,” he readily admits, “looks like a Galapagos tortoise.”

But the New York native finds beauty in his motley crew. He particularly loves the amphibians that have had to adapt to harsh environments to survive. His favorite is the thorny devil lizard from Australia, because the spiky critter has a unique way of collecting water on its skin from the morning dew in the arid climate — and because its eyes shoot blood (a defense mechanism to fend off canine predators).

“You have heard of extreme sports,” said Rosado. “This is extreme living.”

Much of his job involves protecting the collection for future generations. The museum’s endless rows of jars of salamanders, turtles, snakes, lizards, and more have been painstakingly reorganized thanks to Rosado, who helped to develop the new shelving system that replaced the museum’s outdated wood cabinets.

“This is my baby,” he said, pointing to the majority of the collection now stacked on shiny, movable steel shelves, a 178 percent increase in linear space.

In addition, Rosado manages a staff of five, coordinates the countless loans of items from the collection to different parts of the globe, and connects local graduate and postdoctoral students with the collection.

He also helped digitize the frozen-in-time resource. “Now we are totally electronic,” he said of the 330,000 lines of data about the collection now searchable online. Rosado is also helping to manage the process of photographing and scanning images of the collection.

In his spare time, he hopes one day to advance to the next black-belt level in taekwondo.

His wife, with whom he has two young children, is a biologist who studies beetles at Wellesley College.

Most recently, he visited a fitting locale: the Galapagos Islands, accompanying his wife on a research trip. Hanging out with the friendly giant tortoises, ones that were moving instead of static and stored on a shelf, was, he said, “very cool.”

The dynamic nature of the work is what keeps Rosado smiling. There’s always something new to learn, new research, new ideas, he said, and new students to learn it with.

“It’s the collaboration with both the collection and the people.”

Over the years, Rosado has put his skills to use in other ways around campus. He is the go-to guy when there is a snake on the loose. He recalled showing up one year to a College House to seek out a wayward small boa constrictor. A Harvard police officer met him at the doorway with his weapon at the ready. Rosado opted for simple sticky traps placed against the wall.

Sometimes, he said with a smile, “the students have animals they are not supposed to.”