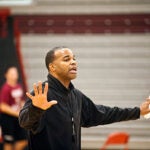 Best score since audit started in 1999

Students from the Faculty of Arts and Sciences’ Resource Efficiency Program (REP) and staff from Harvard Recycling conducted the 13th annual waste audit on Nov. 11. The audit assesses how well undergraduate residents separate recyclable papers, cardboard, bottles, and cans by measuring the weight of these items discarded as trash and not recycled.

Results showed that recyclables comprised 25 percent of the sampled trash. Last year, 32 percent of Harvard’s trash was recyclable. This is the lowest fraction of recyclables in the trash since the audits began in 1999.

Reusables were only 6 percent of this year’s trash as compared with 12 percent last year.  Overall, recyclables and reusables were 31 percent of the trash as opposed to 44 percent last year. Reusables discarded as trash included various used but serviceable articles of clothing, terry cloth washcloths and towels, and a 2009 SourceBook. Expansion of “reuse shelves” from four pilot Houses last year to all 12 Houses this year may be one reason. “Pforzheimer House’s reuse shelves are extremely active, with lots of clothing coming and going every week,” according to Brandon Geller, REP coordinator for the Office for Sustainability.

“Overall, I’m encouraged by the results,” said Gogan. “We need to do a better job getting people to recycle beverage containers, including paper coffee cups. Also, we have a lot of opportunities to compost, as organics represented 31 percent of the sample.”