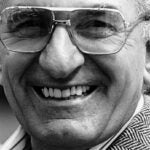 David Turnbull was a physical chemist who played a prominent role in the emergence of materials science as a multi-disciplinary field, to which he contributed a comprehensive understanding of the rates of phase transformations in liquids and solids.

He was born on February 12, 1915, on a farm in northwestern Illinois that is still owned by his family.  He loved the farming life, but an early asthmatic condition made him unfit for some of the work, which led his parents to steer him toward higher education.  He got a degree in Chemistry from Monmouth College in Illinois, and went on to the University of Illinois in Urbana, where he got his Ph.D. in physical chemistry in 1939.

He then joined the Faculty at the Case School of Applied Science where, during World War II, he trained naval cadets and did research on synthetic rubber and on the improvement of additives for heavy-duty lubricants.  In Cleveland he met Carol Cornell, whom he married in 1946 and who remained his loving and supporting companion till her death in 1999.

In late 1946, Turnbull joined the General Electric Research Laboratory in Schenectady, N.Y., as one of the first members of the group of Herbert Hollomon, who was forming a multi-disciplinary team with representation from metallurgy, applied mechanics, chemistry, and physics to attack the problems posed by responses of metals to mechanical and thermal treatments.  By the early 1950s Hollomon’s group, together with a few others, such as William Shockley’s group at Bell Laboratories and Cyril Smith’s Institute for the Study of Metals at the University of Chicago, was demonstrating the power of the multi-disciplinary approach to materials research and advancing the recognition of “Materials Science” as what was then called a “superdiscipline.”

In 1962, Turnbull joined the Harvard University faculty as Gordon McKay Professor of Applied Physics in the Division of Engineering and Applied Physics (now the School of Engineering and Applied Sciences).  Again, it was the special multi-disciplinary character of the Division under then-Dean Harvey Brooks that attracted him to Harvard over other academic offers he had at the time. It was the only university he visited where there would be no organizational barriers between him and his new colleagues: the physicists Harvey Brooks and Nico Bloembergen,  the metallurgist Bruce Chalmers and the applied mechanician Bernard Budiansky were all in a single Division.  Turnbull continued to be a source of inspiration and advice to his younger colleagues, whom he encouraged to cross the bridges between their fields.

David Turnbull was a master teacher.  Some who knew him may find that statement surprising: as a lecturer, he was no great orator, nor an entertainer.  And yet, the many who attended his classic graduate course on kinetics of phase transformations, which he taught for twenty-five years, remember it as one of the best they ever took. There was, of course, his unique and deep insight into the subject. But he also knew, pedagogically, that a real grasp of a subject only comes from working with it, which is why assigning many well-thought-out, challenging problems was his most effective teaching tool.  Turnbull was also committed to improving undergraduate teaching.  He developed, and taught for several years, the thermodynamics part of an introductory physics course, much beloved by its alumni, where students learned from hands-on experimentation in small groups.

Turnbull had an unusual ability to discern the specific strength of each student, and to provide a nurturing environment for each one to take advantage of that strength.  Those with a green thumb in the laboratory, he encouraged to try innovative experiments; to those with a lively imagination, he suggested problems worth modeling; those with a mathematical bent, he let loose to see where the latest in computational power could take them. For several of his students he was the second or third advisor—the one who finally recognized their special talent and who had the patience to let it come to fruition.

But what all his alumni remember most about David as an advisor are his human qualities: his wisdom, his quiet integrity, his infinite patience, the breadth of his knowledge—from baseball to ancient history—and the warm welcome that David and Carol made for students at their home.

Turnbull’s scientific life achievement is a comprehensive, quantitative view of the many factors that govern the kinetics of phase transformations in condensed matter.  The list of specifics is long.  He made an apparently intractable stochastic phenomenon like crystal nucleation yield to quantitative experimentation and analysis. He showed that a liquid has a structure of its own, unrelated to that of crystals, as many had thought. He predicted, successfully, that all liquids could be made into glasses, and drew up a widely used, intuitively appealing picture of how this happens. He made sense of the fast and short-circuit diffusion phenomena that were clouding our understanding of how atoms move in crystals. He understood more deeply than anyone the wealth of ways in which crystals grow.

When, in 1986, he received the first Japan Prize in materials science for his pioneering work on metallic glass, which had led to the development of the most efficient electrical transformers we have today, there could not have been a more worthy awardee of the most prestigious prize in the field.

David Turnbull died at his home in Cambridge on April 28, 2007.  Until shortly before, he had continued to come to his office, visit the lab, and attend seminars. He will be fondly remembered both as a remarkable person and an outstanding scientist.

He leaves two sons, a daughter, and four grandsons.