A master at his craft 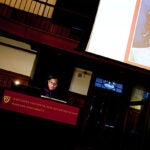 Tracy Kidder ’67 likes to hear a good story, but he loves to tell one. You can hear it in his voice.

The New York native is animated when describing a lumber mill in Maine, a trip to Henry David Thoreau’s cabin, and the history of the humble nail — research all connected to his 1999 book “House.”

He calls those excursions and insights the “exteriors” of his stories, the extra level that goes beyond primary research, the in-depth character studies that he considers the “engines” of most narratives.

Kidder is tall and lean and has a surprisingly soft yet husky voice. In his small office in the Harvard Kennedy School’s Joan Shorenstein Center on the Press, Politics and Public Policy, he spoke recently about his years as a Harvard undergrad, his work as a writer, and his return to campus as the center’s first writer in residence.

Kidder won the Pulitzer Prize for general nonfiction in 1982 for his book “The Soul of a New Machine,” about the computer industry. He has authored eight other books, and is a contributor to several publications. But he is perhaps best known locally for his portrayal in “Mountains Beyond Mountains” (2003) of Paul Farmer, the Harvard doctor and founder of Partners In Health, a mainstay health care provider in Haiti.

He is at Harvard for the semester working on a new book on writing with his collaborator and longtime editor Richard Todd. He has also given a number of talks about the craft of putting a compelling tale on paper.

The residence program was established in honor of New York Times editor Abe Rosenthal and his legacy as a man who “prized journalism, reporting, and writing,” said Alex Jones, director of the Shorenstein Center and Laurence M. Lombard Lecturer in the Press and Public Policy.

“When we started to think about who we wanted as our inaugural writer, there was no question who our first choice was,” he told a crowd while introducing Kidder at one of the author’s Harvard presentations on Oct. 19.

In the talk, Kidder expanded on some of the writer’s arts — pace, point of view, tone, and structure. He also discussed the critical task of making a subject spring to life in the mind of a reader. In the words of his editor Todd, Kidder said the ultimate goal is “to get life off the page and into the reader’s imagination.”

He praised the work of English author Graham Greene for accomplishing exactly that. Though he rarely ever directly describes his characters, “[Greene] puts these people in motion and finds a way to let us imagine them.”

The best structure of a story is one your reader isn’t even aware of, he told the audience.

Kidder clarified the point with a sentiment from his former tai chi instructor: “When you get good you will develop your own style. When you get very good, you will learn to hide it.’”

One of the biggest keys to perfecting his own writing is rewriting, an often brutal task that involves much more than simply shifting a paragraph, moving a sentence, or inserting a new word. Sometimes it means, he said, “starting over.”

Another critical key is a second set of eyes. For that he relies on Todd, his friend and editor of more than 40 years. The two met while Kidder was working at The Atlantic and they have been together ever since. (Todd’s wife, Kidder said, has accused him of “sharing a kidney” with her husband.)

Kidder began his time at Harvard studying government. “I wanted to change the world,” he said. But during a lecture by Henry Kissinger, he realized he was “bored” — not with Kissinger, but with his choice of concentration.

He credits poet and classicist Robert Fitzgerald, his first English professor at Harvard, with inspiring in him a love of writing.

“When you meet a teacher who inspires you tremendously, it’s a two-way street,” said Kidder, who first connected with Fitzgerald in a creative writing course. “You also have to be ready for that teacher in a way, but I certainly was.”

He said Fitzgerald took his students seriously, expected “classic work” from them, and taught them one of the most crucial lessons a budding writer can learn: not to fall in love with their own work.

“He would point to the wastebasket,” Kidder remembered, “and say, ‘This is the greatest repository I know for writers.’”

After college and a year as an Army intelligence officer in Vietnam, Kidder clung to the idea of being a writer. He enrolled in the Iowa Writers’ Workshop. The intense seminars made him aware of a higher standard for writing, and of the talented fiction writers who were more likely to write a great novel than he was.

Ultimately, Kidder connected with The Atlantic and decided to give long-form narrative nonfiction a try, and it took.

His inspirations include poets like Emily Dickinson and writers like John McPhee and George Orwell. When he gets stuck, he frequently goes back to writing with a pen and paper. And he will often open to a random page of “Moby Dick” and read for a while, “Just to feel sort of free enough to write again.”

As for finding his subjects, Kidder said it’s not easy, but that he tries to find a person who is doing “something interesting, or who interests me.” It’s not ideas he finds compelling, but people.

Above all, he told his audience last month, “the cardinal rule for nonfiction writers is to make what you have … believable to your readers.”

You have to find a way to credibly tell your readers, said Kidder: “I know this sounds too good to be true, but it happened.”