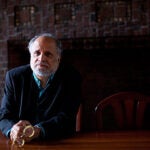 Series opens with discussion of the ever-inventive Stieglitz

Alfred Stieglitz (1864-1946) is credited with getting photography accepted as an art form — reason enough for him to be the first subject in this year’s series of In-Sight Evenings at the Harvard Art Museums. The ticketed, after-hours events, complete with receptions before and afterward, are billed as a way to look “deeper and differently” at a single artist or work.

Deborah Martin Kao, who spoke to a near-capacity crowd in the Sackler Museum auditorium, acknowledged right away that her subject is “an artist who is bigger than life.” The first image in her slide show was of an intense, steely-eyed Stieglitz in 1909, a “galvanic portrait,” she said, taken “at the height of his powers.”

Kao, who is Harvard’s Richard L. Menschel Curator of Photography, also showed “The Steerage” (1907), “one of the iconic images of 20th century art,” she said. The mesmerizing frame includes a slanting funnel, bisecting gangplank, and repeated circles — hats, bonnets, and bare heads. “I saw,” said Stieglitz of the image, “a picture of shapes.”

Kao focused on four images from “Picturesque Bits of New York and Other Studies” (1897), a rare photogravure edition and the first portfolio of Stieglitz’s work. The images, acquired by Harvard in 1969, show the merging, clashing trends of both Stieglitz’s craft and of that era’s photography: echoes of an impressionist, fine-art 19th century, and a gritty, realistic, socially conscious 20th century.

The images are stunning: “Reflections, Venice” shows a moody, narrow canal; “The Glow of Night — New York” is a pioneering after-dark photo; “On the Seine — Near Paris” is picturesque; and “A Wet Day on the Boulevard — Paris” is an image so lifelike, said Kao, it is “like a glistening street you could walk onto.”

But the acquisition of “Picturesque Bits” in 1969 tells a story of its own, she said. It was a moment in time when “photography’s quest to be art [was] not quite accepted.

The Stieglitz gravures were the only photographs brought into the Harvard collection in 1969. By 1970, though, Harvard acquired its collection of Ben Shahn photographs, and by 1972 Davis Pratt became the first curator of photographs at what is now the Fogg Museum. From then on, the University photo collection, which started in the 1850s, gained momentum. Today, by one count, Harvard has 7.5 million photographic images in 47 repositories.

Kao showed images from edgy practitioners such as Diane Arbus, Garry Winogrand, and Lee Friedlander. But Stieglitz — the man pictured in a starched collar and steel-rimmed glasses who grew up in the Victorian era — is arguably “the father of fine-arts street photography,” she said. His influence is felt to this day.

He began to use a handheld camera in opposition to “the shutterbugs of the Kodak era,” said Kao, who quoted Stieglitz on “the rotten sportsmanship” of the late 19th century’s pre-loaded cameras.

The co-author of Shahn’s “New York: The Photography of Modern Times” (2000), Kao also led her audience through a survey of art photographers before the Stieglitz era.

Among the photographers who “set the foundation,” she said, was Etienne Carjat (1828-1906), whose 1863 portrait of a dour Charles Baudelaire came with its own irony: The French poet once dismissed photography as a “brutish aping of nature.”

Then there were the photographers whose work depended on posed, allegorical images meant to mimic painting.

Kao showed “The Open Door” (1844) by pioneer William Henry Fox Talbot (1800-1877), whose soft, painterly tones were an answer to the detailed, documentary qualities of the daguerreotype. The works of Oscar Gustave Rejlander (1813-1875) were also “photography trying to be history painting,” said Kao. Henry Peach Robinson (1830-1901) used his photos to show the life of noble peasants, another painterly tradition.

Julia Margaret Cameron (1815-1879) made intimate, soft-focus portraits and occasional moralizing allegories such as “Vivian and Merlin” (c. 1870), where a harlot is seducing the aging wizard.

Peter Henry Emerson (1856-1936), who called Cameron “the only old master photography has to boast of,” photographed peaceful rural scenes that recalled paintings from an earlier era. But he was also “a prophet,” said Kao, “of a … new realism.”

Emerson was among judges who weighed in on Stieglitz’s first prize-winning photo image, “The Last Joke — Bellagio” (1887). The image evoked the noble peasantry of painters past, but it also prefigured the ethnographic realism that decades later would dominate street photography.

By the 1890s, the energetic and self-promoting Stieglitz struck off on his own, experimenting and searching, said Kao, but was also determined to create a coterie of art photographers “with an American center” in New York.

The next In-Sight Evenings lecture is Dec. 8. For more information.