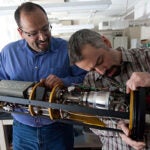 Microbes to the rescue

While some power companies scour the globe for steady winds to drive giant turbines, a biologist is turning to lowly termites and their lofty mounds to understand how to harness far more common intermittent breezes, seeking ideas that could drive nature-inspired building systems whose “sloshing” air movement could provide ventilation and cooling.

J. Scott Turner, a biology professor at the State University of New York, brought his termite-mound studies to Harvard’s School of Engineering and Applied Sciences Wednesday (Oct. 20) in a talk sponsored by Harvard’s Wyss Institute for Biologically Inspired Engineering.

Turner’s topic, “New Concepts in Termite-Inspired Design,” presented the results of years of research into the structure of termite mounds in Namibia, including an extraordinary effort to fill a mound’s tunnels with plaster and then slice off millimeter-thick layers to create a cross-sectional map of the insides.

Turner’s work debunked some 50-year-old assertions that termite mounds’ complex tunnel structure works to circulate air in an orderly manner from a nest chamber low in the mound, up a central chimney away from the nest, and, as the air cools, down small outer tunnels to the bottom of the nest.

That understanding of termite mound function has already inspired human architecture —including a building in Zimbabwe designed without air conditioning that instead uses wind energy and heat-storing materials to maintain a moderate temperature. The only problem with these sorts of termite-inspired designs, Turner said, is that his studies show that the mounds actually don’t work that way.

Deploying temperature and humidity gauges, and armed with tracer gases, Turner found that a termite mound does not regulate interior temperature. The temperature inside the mound was not appreciably different from that of the surrounding ground, rising during some parts of the year and then falling. In addition, he found that the air in the nest didn’t really circulate. Instead, it was stable, with cooler air in the nest low in the mound and hotter air in the mound’s upper portions and chimney.

The same fluctuation wasn’t found with humidity, which was maintained at roughly 80 percent year-round. But it isn’t the mound or its design that does that job, Turner said. Instead, termites actively move water within and out of the mound as they transport water-soaked earth. In addition, the symbiotic fungi that live in the mound with the termites also help to regulate humidity. The fungi, which help the termites digest tough cellulose in the plant material the insects bring into the nest, form complex, folded bodies that absorb excess humidity during wet months and release water during dry months, Turner said. This helps to maintain a stable humidity, dry enough to keep moisture-loving fungal competitors at bay.

“They actively regulate nest moisture, but not through design of the mound,” Turner said.

So, if the mound itself doesn’t regulate heat or humidity, Turner and his collaborators wondered, what does the elaborate branching system of tunnels do?

The answer came on further investigation, when researchers found that the tunnels work as an air exchange system. The smaller tunnels on the mound’s surface, used by workers to move in and out of the mound, also serve to mute the gusty, turbulent air outside the mound. Those high-energy gusty breezes are blocked in the surface tunnels, allowing more gentle air movements to penetrate the mound in a pulsing, in-and-out process akin to a breathing human lung. Through this process, fresh air is exchanged into the deepest part of the mound, “sloshing” in and out in a tidal movement that refreshes the mound’s air.

“We think these mounds are quite efficient manipulators of transient energy in turbulent wind,” Turner said. “That’s how the mound breathes.”

That in-and-out sloshing, Turner said, provides a model for building design. Though most people would refuse to live in a building resembling a termite mound, the tunnel structure could be replicated in building materials used in exterior surfaces, saving energy through passive air exchange systems in everyday, ordinary buildings.

“There might be some really interesting architectural opportunities,” Turner said.