Human rights at a crossroad 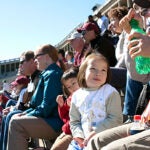 Ten years ago, the task of bringing together Harvard’s many centers and departments under the umbrella of human rights studies seemed daunting. So daunting, in fact, that a University-wide committee was created to bolster the mission and monitor its progress.

“The idea of integrating human rights across the University at the time seemed a rather ambitious, even fanciful one,” Jacqueline Bhabha, Harvard’s adviser on human rights education, told a crowd at a private reception on Tuesday evening (Oct. 12). The question then, Bhabha recalled, was “Why should we integrate?”

The buzzing room at the Harvard Faculty Club was proof that the University’s human rights community has largely bypassed any initial problems with collaboration. But the evening’s speakers, including Bhabha, raised an even bigger question: Where does one go after initial success?

The decade-old University Committee on Human Rights Studies was disbanded in June, having largely achieved its goals of promoting cross-disciplinary research and creating human rights-centered courses for undergraduates. In that light, Tuesday’s annual reception — normally a networking opportunity for visiting scholars, faculty, and students — became a tone-setting event for the next phase of human rights scholarship.

“The Harvard community’s commitment to human rights has changed dramatically since I arrived here 30 years ago, and it warrants celebration,” said speaker Martha Minow, dean of Harvard Law School. “The opportunity to build bridges across the University is what makes this moment so propitious. If we can leverage the efforts that are already going on in particular places at this University, I think there’s no stopping us.”

The Human Rights Program at the Law School, along with the François-Xavier Bagnoud (FXB) Center for Health and Human Rights and the Carr Center for Human Rights Policy at Harvard Kennedy School, will maintain leadership roles in Harvard’s work on human rights. In addition, Bhabha will head a new University-wide human rights directorate to oversee collaborative efforts.

“In my relatively weak role — I wish I were more powerful — I want to do everything I can in the year ahead to further this agenda,” Brandt told the crowd. Human rights work “reminds us that universities can never be ivory towers,” he added. “It links policy and practice to material outcomes for people around the world.”

Jennifer Leaning, director of the FXB Center; Caroline Elkins, chair of the Committee on Ethnic Studies; and Charlie Clements, executive director of the Carr Center, also gave brief remarks before the crowd dispersed into clusters of chatter.

Elkins addressed undergraduate education in human rights, an area in which Harvard is working to meet student demand. While there is now a secondary concentration in human rights available, Elkins said, Harvard College offers only 12 of the University’s roughly 250 courses that discuss the subject.

“We have to think deeply about the needs of our students,” Elkins said. She called for the hiring of more permanent faculty engaged in human rights work to provide students with consistent advising and mentorship.

Now that the original committee’s work is done, Bhabha said later that evening, she hopes to focus on securing funding for faculty research and for Scholars at Risk, a program that brings persecuted intellectuals from around the world to Harvard for a yearlong research fellowship.

“I think human rights at Harvard is evolving in the right way,” Bhabha said. “I’ve never believed it should be a ghetto of its own.” Rather, she said, the study of human rights should serve as a lens through which to view many fields, from health to housing design to foreign policy.

“In the first nine years of my research, I was living in an intellectual vacuum,” said Siddharth Kara, the author of “Sex Trafficking: Inside the Business of Modern Slavery.” “It was consciousness-raising, telling horror stories.”

Kara is now a fellow of the Carr Center’s Program on Human Trafficking and Modern-Day Slavery, where he is grounding his years of international fieldwork in law and economics. The opportunity to experience other disciplines’ approach to human rights “has been immensely helpful,” he said. “Being here has helped evolve my own thinking.”