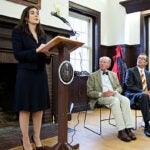 S. Allen Counter has again successfully nominated the host of the Nobel Peace Prize Concert and Ceremonies. It was announced Sept. 30 that Denzel Washington was selected to host this prestigious event in Oslo, Norway, on Dec. 10. Actors Will Smith and Jada Pinkett Smith hosted the 2009 event in Oslo when President Barack Obama received the Nobel Peace Prize. Counter is director of the Harvard Foundation and clinical professor of neurology at Harvard Medical School.

Upon receiving word of his selection, Washington said, “I am honored to attend the Nobel Peace Prize Concert this year and participate in this historic and momentous event to help spread the message of global peace.”

The 2010 Nobel Peace Prize winner will be announced on Oct. 8. For more information on the event, visit the Nobel website.