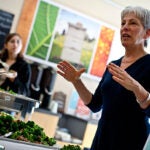 Getting fresh with Mollie

The rhythmic sound of drums echoed through the Northwest Lab building Thursday evening (Oct. 21) as singers, dancers, and several hundred scholars and students gathered to celebrate the growth of Harvard’s Africa programs.

The event, “Africa in Motion,” featured comments by Harvard President Drew Faust, who visited Botswana and South Africa last year, and who said that even though Africa-centric programs have grown rapidly in recent years, she was looking forward to seeing what’s coming. One of the great strengths of Africa programs at Harvard, she said, is that they span the University, pulling expertise from a variety of fields, departments, and schools.

The event was “about what we’ve achieved, about all the places we are going. It’s also about how together we can do so much more than we can alone,” Faust said.

“This is an exciting time at Harvard. It’s a wonderful time to study Africa and [to study] in Africa,” Higginbotham said.

The celebration featured Thursday’s opening ceremonies, held at The Laboratory at Harvard, and a daylong symposium Friday of panels discussing key issues affecting the continent, including health, economics, and government. There also was a closing round table, moderated by Elkins.

The opening ceremonies featured singing by Harvard’s Kuumba Singers, dancing by the Harvard College Pan-African Dance and Music Ensemble, and information tables set up around The Laboratory by various Africa-focused groups. Visitors were immediately enveloped in sounds and sights, which included a large reproduction of the continent on The Laboratory’s floor, with markers for people to sign and post thoughts about Africa.

In his Thursday evening address, Gates hailed the growth of Africa-centered programs at Harvard in the 20 years since he arrived. He said that history was being made as Harvard throws its weight behind the importance of African studies.

Gates and Elkins, who hosted the event, thanked Faust for her leadership on the issue, and Gates presented her with a bound volume of images of people of African descent in various places in Western culture, drawn from a photo archive at the Du Bois Institute.

Harvard’s strength in Africa programs has been noted externally, with the Harvard University Committee on African Studies being named a National Resource Center for African Studies by the U.S. Department of Education, Elkins said. The designation comes with grant money for programs, student travel, and outreach.