A ‘whif’ of a breakthrough 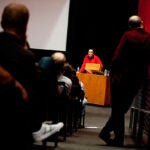 Looking back at Anger

When David Edwards dreamed three years ago of creating inhalable chocolate, he put his inspiration into action with the help of resources far and near.

On campus, Edwards, the Gordon McKay Professor of the Practice of Biomedical Engineering in Harvard’s School of Engineering and Applied Sciences, turned to his own students, who began testing the intriguing notion of eating via breathing. Meanwhile, at Edwards’ art and design innovation center Le Laboratoire in France, the double-Michelin-starred chef Thierry Marx was also testing Edwards’ idea by working to produce gratifying flavor through aerosol.

The resulting product, Le Whif, released last year, was a success that overstepped culinary and scientific boundaries. But even more of an accomplishment than Le Whif, Edwards might argue, was the revolutionary philosophy behind it. In his new book, “The Lab: Creativity and Culture,” a sequel to 2008’s “Artscience: Creativity in the Post-Google Generation,” Edwards reveals how risk-taking and multi-disciplinary collaboration are essential for creativity.

Calling for the desegregation of the worlds of science and art, Edwards argues for a new model of lab — the “artscience” lab — that “expands the possibilities of experimentation beyond those of traditional science labs.”

Artscience labs, like Edwards’ Le Laboratoire in Paris, are Bauhaus-inspired “experimental environments where it becomes hard to say what is art, what is science, where there is a single creative process, and this process, more than any result the process produces, is what matters,” said Edwards.

At Harvard, Edwards founded the Idea Translation Lab, an educational program with resources to support student idea experimentation, as well as The Lab at Harvard — a three-year experimental exhibition program for transforming common University space into a catalyst for student idea development and learning.

“My book ‘The Lab’ calls for a sustainable model of change guided as much by the arts as by the sciences,” he said. “I wished to make the claim that artistic experimentation, as process more than as result, cannot only also produce benefit, it can actually enhance the benefit of every kind of experimentation, and lead to broader dialogue between the public and creator, and more value generation outside the traditional innovation center of industry.”

The Michigan-born biomedical engineer is currently at work on a bevy of innovations that include edible bottles. Last year he released Andrea, a plant-based air purification system invented with Mathieu Lehanneur.

“To the degree that contemporary life is becoming increasingly a continuum of innovative process, directing that process to cultural, social, educational, and commercial benefit seems to me the best outcome we can hope for any innovation model,” Edwards said. “That’s the argument of the book, a kind of manifesto for a utopist lab. What we’re building in Paris and other places is just a first approximation of what an artscience lab might be.”