A fresh look at College life 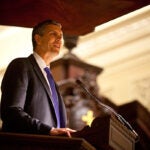 Those that serve, teach

Parents Weekend gives families a glimpse of the Harvard experience

A Harvard undergraduate, at home for a visit, has something difficult to tell his mother. He finally has picked a career, one that’s a radical departure from his parents’ dreams for him. He knows that his decision will shock her. He gathers his courage, and blurts it out.

“What?” his mother howls. “My child? Why, your whole family has been actors!”

“Mom, I can still appreciate theater,” the son says. “How will you make a living?” she cries. “I’m just shocked that my pride and joy would go into the realm of medicine and saving lives. Why don’t you just play a doctor on TV?”

This scene, hilariously staged by a Harvard undergraduate comedy troupe, brought roars of laughter from families in Sanders Theatre Friday (Oct. 15) as part of Freshman Parents Weekend, a two-day program of lectures, tours, and open houses held each fall.

The skit was part of the president and dean’s welcome, and was one of several designed to put a humorous spin on situations often faced by Harvard undergraduates and their families, such as when students’ post-college plans and aspirations no longer line up with those of their parents.

“It’s difficult for students trying to find their passion,” said Robin Mount, director of the Office of Career, Research, and International Opportunities. “High school is different from college. In college, a subject may get a lot more interesting and complex, or less interesting. Students who want to be doctors may have the experience of really living and breathing the field, and come back home to say, ‘I hate the work! I don’t like sick people!’ That holds true for being an actor, and anything else.”

Earlier in the program, Harvard President Drew Faust set the stage for the performances and conversations with remarks on her hopes for students. Foremost, she said, was her wish that undergraduates discover their passions.

Faust was introduced by College Dean Evelynn Hammonds, who shared “some of the accomplishments and activities” of students from their first six weeks. These included a conversation with former British Prime Minister Gordon Brown, a discussion about careers in science with Harvard faculty, and a series of
structured conversations designed to help students talk with one another about issues of identity, tension, and community.

Hammonds reassured parents, who might be a bit jealous of the fun their offspring were having. “Don’t worry,” she said. “We’ve tried to give you a chance to partake in some of these activities. We hope you have as much fun as your sons and daughters are having here.”

Indeed, there was plenty for families to do. Friday’s activities included tours of Widener Library and Memorial Hall, open houses at many Harvard museums, and an address by U.S. Secretary of Education Arne Duncan. David Friedrich, assistant dean for student life, said the activities were designed to give parents a taste of the student experience.

“The schedule encourages participation in a variety of academic, athletic, artistic, and recreational activities,” he said. “With tours, panels, and open houses, parents get to sample the vast resources of the University, from the museums and libraries to the offices that work to support students.”

On Saturday, some parents and students rose for a jogging tour of Harvard. Many watched a Harvard football game in the afternoon and attended a talent show hosted by the Black Students Association (BSA) in the evening.

In between, many filed into Holden Chapel for a master class with Robert Coles, professor emeritus of psychiatry and medical humanities at Harvard Medical School, who taught a chapter from his new book, “Handing One Another Along.”

Coles explored compassion — an idea at the center of much of his writing on morality and spirituality — by telling the story of his meeting with Ruby Bridges, an African-American girl who was the first to attend a previously all-white elementary school in New Orleans during the 1950s. Coles visited the girl to learn about the anxieties and defenses experienced by a child under extreme stress. Bridges, who was escorted past an angry mob of 200 to 300 people every day by armed federal marshals, certainly fit that description. Yet Coles said the girl appeared quite happy during his visits. After a time, he pressed her about her thoughts and feelings.

“Ruby, tell me what goes on in your mind when you pass those people,” Coles remembered saying.

“Well,” the girl said, “I always think the same thing. I always pray for them.”

“You pray for them?” Coles asked.

Bridges looked up and said, “Well, don’t you think they need praying for?”

Before the BSA talent show and performances by the Bach Society Orchestra and Harvard’s a cappella groups, parents were able to learn more about freshman pre-orientation at the Freshman Arts Program (FAP) Pageant Revival and at various receptions. The featured work at the pageant was “FAP 16: Between,” a series of short plays, songs, videos, and dance routines that explored transitions experienced by first-year students.

In one sketch, freshmen dressed as ham and cheese slam together onstage, prepared to make a sandwich together. Then cheese breaks away, concerned about her “office romance” with ham. “These things never work out!” she cries. Undeterred, ham tries to lure her back, confessing that he was once a pig, but has now changed. Comforted, cheese returns. “If PB & J can make it work, so can we!” she exclaims.

As the weekend’s program drew to a close, Peter Kelsey and Ginger Ryan, parents of Anna Kelsey ’14, said that they had enjoyed themselves. “The University has done a great job putting together events that had a lot of meaning for us, such as the lecture from Professor Coles,” said Kelsey.

Ryan was impressed by the fact that many events focused on public service. “The things we’ve gone to have had a real social justice and service theme,” she said. “It was a chance to see and be impressed with the people our daughter is meeting, and all that Harvard has to offer.”