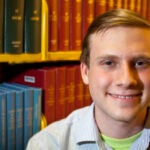 Forward, into the past

It’s a bird, it’s a plane, it’s a microrobot

Engineers at Harvard University have created a millionth-scale automobile differential to govern the flight of minuscule aerial robots that could someday be used to probe environmental hazards, forest fires, and other challenges too perilous for people.

Their new approach is the first to passively balance the aerodynamic forces encountered by these miniature flying devices, letting their wings flap asymmetrically in response to gusts of wind, structural damage, and other real-world impediments.

“The drivetrain for an aerial microrobot shares many characteristics with a two-wheel-drive automobile,” said lead author Pratheev S. Sreetharan, a graduate student in Harvard’s School of Engineering and Applied Sciences. “Both deliver power from a single source to a pair of wheels or wings. But our ‘PARITy differential’ generates torques up to 10 million times smaller than in a car, is 5 millimeters long, and weighs about one-hundredth of a gram — a millionth the mass of an automobile differential.” PARITy stands for passive aeromechanical regulation of imbalanced torques.

To fly successfully through unpredictable environments, aerial microrobots — which resemble insects, nature’s nimblest fliers — have to negotiate conditions that change second by second. Insects usually accomplish this by flapping their wings in unison, a process whose kinematic and aerodynamic basis remains poorly understood.

Sreetharan and his co-author, Robert J. Wood, recognized that an aerial microrobot based on an insect did not have to contain complex electronic feedback loops to control wing positions precisely.

“We’re not interested so much in the position of the wings as the torque they generate,” said Wood, an associate professor of electrical engineering at Harvard and core faculty member of the Wyss Institute for Biologically Inspired Engineering. “Our design uses ‘mechanical intelligence’ to determine the correct wing speed and amplitude to balance the other forces affecting the robot. It can slow down or speed up automatically to correct imbalances.”

Sreetharan and Wood found that even when a significant part of an aerial microrobot’s wing was removed, the self-correction engendered by their PARITy drivetrain allowed the device to remain balanced in flight. Smaller wings simply flapped harder to keep up with the torque generated by an intact wing, reaching speeds of up to 6,600 beats per minute.

The Harvard engineers say their passive approach to regulating the forces generated in flight is preferable to a more active approach involving electronic sensors and computation, which would add weight and complexity to devices that need to be as small and as lightweight as possible. Current-generation aerial microrobots are about the size and weight of many insects, and even make a similar buzzing sound when flying.

“We suspect that similar passive mechanisms exist in nature, in actual insects,” Sreetharan said. “We take our inspiration from biology, and from the elegant simplicity that has evolved in so many natural systems.”

Sreetharan and Wood’s work was funded by the National Science Foundation.