The oozing fog of war 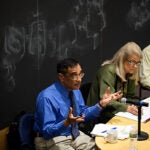 A backdrop on Islam in America

The changing face of warfare increasingly puts civilians in battlefront crosshairs, blurring the line between who is a soldier and who is not, and creating quandaries for soldiers seeking assurances that those who look like civilians won’t shoot at them.

Three authorities on international conflict discussed the complexities on the ground and in international law because of the spreading fog of war on Wednesday (Sept. 22) during a panel discussion at Harvard’s Center for Government and International Studies. The event, sponsored by the Harvard Humanitarian Initiative (HHI), featured speakers from HHI, the International Committee of the Red Cross, and the nonprofit group Humanitarian Policy and Conflict Research.

In a world where conflicts are increasingly small-scale, intra-national, and waged by nontraditional forces, there is a robust, ongoing debate over who armies can kill and who they cannot.

International law makes a clear distinction between combatants (uniformed soldiers who are fair game whether they’re fighting or not) and civilians (basically everyone else who cannot be targeted regardless of the circumstances), according to Naz Modirzadeh, associate director of Humanitarian Policy and Conflict Research. Under international law, Modirzadeh said, people who are not legal combatants but who take up arms can be prosecuted criminally for crimes such as murder. Soldiers, on the other hand, are permitted to kill each other without being charged.

The problem is that most conflict today is not between standing armies, uniformed, equipped, and arrayed across a battlefield from each other. Most ongoing conflicts now are messy and chaotic. Battlefields are often urban and intermingle civilian and military targets, raising the prospect of collateral damage. Fighters, from terrorists to rag-tag militias, are often irregular, moving freely between roles as fighters and civilians. Further, the expanded role of armed private security contractors and the presence of civilian intelligence personnel at forward operating bases add to the uncertainty.

The “revolving door,” when fighters take up arms and then blend back into the civilian population, presents one of the most thorny issues, according to Modirzadeh.

These difficulties play out, for instance, in the Democratic Republic of the Congo, where HHI’s Jocelyn Kelly has been conducting research into the roots of gender-based violence.

Kelly, HHI’s research coordinator for gender-based violence, has conducted interviews with dozens of members of the Mai Mai militia, a homegrown group with roots as a protective force for local villagers, but which has been responsible for rape and other abuses of civilians during the long-running conflict there. Kelly described the lives of these fighters, saying they are often brutalized themselves as part of an initiation ritual aimed at stripping away their civilian lives and inhibitions. The understanding is that their gun is their salary, and they live off the civilian population for food, wealth, and sex.

Despite perceptions to the contrary, the militia is organized, Kelly said. The Mai Mai have structured chains of command, with regular communication. That structure means it is possible to hold the leadership accountable as a way to stop atrocities.

Kelly said Mai Mai militia members often pass through the revolving door between civilian and military roles. Life in the militia is brutal and uncomfortable, prompting members to leave the service. Once back among civilians, however, the former fighters find themselves jobless and stigmatized by the militia’s reputation. Many find their way back to the militia.

From the professional soldier’s point of view, the fuzzy line separating combatants and civilians can be life-threatening, according to Nick Nobbs, the Red Cross delegate to the armed forces. Though politicians and bureaucrats may have the luxury of parsing who is and who is not a combatant based on descriptions enshrined in international law, soldiers who have to make quick decisions to save their own lives or those of their comrades need simpler rules that can be rapidly applied.

Guidance given by the Red Cross in 2009 said those who are members of organized armed groups and who have a continuous combat function can be targeted. From a practical standpoint, Nobbs said, this means that if you’re carrying a weapon, you can be targeted. Other targets can include those who may not be fighting but who participate directly in hostilities, such as running arms to the fighting or interfering with opposing combat forces.

Nobbs said the battlefield challenges include, besides determining who should be attacked, how much force to use, so that the destruction is proportional to the military objective, keeping the chances for collateral damage low.

“It’s not always obvious who is involved,” Nobbs said. “There is an obligation for people to determine who’s a target … and whether anyone should attack it.”