The dark corners of ‘Cabaret’ 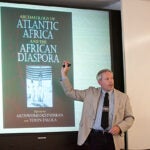 Looking past the plantation

Aside from her fishnet stockings, singer Amanda Palmer, known for her edgy look and sound, was almost demure in a beige ensemble during a Harvard panel discussion. But the topic was anything but.

During the discussion Monday night (Sept. 20), Palmer and a group of Harvard scholars explored some of the dark, sinister, and sexualized sides of the popular musical “Cabaret.”

Palmer, the front woman for the punk rock, alternative cabaret duo the Dresden Dolls, plays the emcee in the American Repertory Theater’s (A.R.T.) new production of the show. Attracted from an early age to music, art, and theater that combined the tension of darkness and light, Palmer said her turn as the grotesque, gender-bending master of ceremonies allows her to inhabit that space perfectly.

“There’s a moment on stage where … I get to feel like the human embodiment of those two things colliding: the collision of the ultimate party and the ultimate tragedy,” Palmer told the crowd at Oberon, an A.R.T. theatrical space.

The new production “gets you to turn your gaze to what is just off center,” said moderator Homi Bhabha, the Anne F. Rothenberg Professor of the Humanities and director of the Humanities Center at Harvard, which sponsored the event along with the A.R.T.

It’s with that myopic look that “Cabaret” offers audiences a haunting prediction of a Nazi-ravaged Europe. Weaving vivid imagery from the Holocaust into the production was part of an effort to “reinvigorate the shock value of ‘Cabaret,’ ” said director Steven Bogart, who was also Palmer’s high school drama teacher.

Bogart, who was called from the audience to the stage to add his voice to the discussion, said he hoped his “bold choice” would “devastate people at the end.”

“Cabaret” is based on “The Berlin Stories” by author Christopher Isherwood, and is set in Berlin in 1931 amid Adolf Hitler’s rise to power. The original work served as inspiration for the 1951 John Van Druten play “I Am a Camera,” which later spawned the 1966 musical and the 1972 film “Cabaret.”

The plot follows the intersecting lives of a group of people in Weimar-era Berlin as the Nazis begin to take power, with violence and anti-Semitism in their wake. Much of the action centers on the Kit Kat Klub, a sordid Berlin nightspot.

“I remember reading the script, and all I could hear was Alan Cumming’s voice … [and] thinking I need to be really careful I don’t imitate and fall [back] on him,” said Palmer. “I have to figure this one out for myself.”

If the sold-out performances are any indication, Palmer has succeeded in making the role her own.

Adding a historical perspective to the discussion, panelist Charles Maier noted that as Germany became increasingly polarized in the wake of the Great Depression, the cabarets’ role of master of ceremonies, who was typically tasked with infusing satire and social commentary into the shows, was eliminated.

Nazi Minister of Propaganda Joseph “Goebbels did away with this role. He prohibited [masters of ceremonies] in cabarets because it was too subversive. It was too potentially destabilizing. It opened up a whole realm of criticism he wouldn’t have,” said Maier, Harvard’s Leverett Saltonstall Professor of History.

To close the session, Palmer serenaded the audience with a cover of “Fake Plastic Trees” by the British group Radiohead, while accompanying herself on the ukulele. The song’s final line held a haunting relevance to the discussion.

The event was the first in a series involving the A.R.T. and the Humanities Center. The second talk will take place on Dec. 7 at the Loeb Drama Center following a performance of the musical “The Blue Flower.”