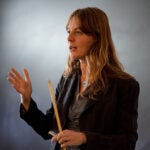 ‘It is within our grasp’

One key, U.S. scientist says, is to foster innovation

Every day, the United States sends $1 billion offshore to finance its appetite for fossil fuels, a situation recognized for decades as a threat to national security and energy independence.

In 1974, President Richard Nixon was the first in a long line of chief executives to promise reductions in energy from abroad. But the percentage of U.S. oil imports since then has nearly doubled.

Meanwhile, fossil fuels are the source of the greenhouse gases blamed for global climate change, an ongoing problem that has engendered another round of presidential promises. The Obama White House recently pledged to reduce such gases 83 percent by 2050, with 2005 as a baseline year.

Reducing dependence on foreign oil and reducing greenhouse gases are the two major challenges of U.S. energy systems, a visiting federal energy official told a Harvard audience Tuesday (Sept. 21). To meet these challenges, he said, the government’s best role is to mitigate risk in the energy industry and to leverage innovation.

Theoretical physicist Steven Koonin, undersecretary for science at the U.S. Department of Energy (DOE), opened this year’s Future of Energy lecture series, sponsored by the Harvard University Center for the Environment.

Koonin is a rare veteran of all three spheres in the energy puzzle: academe, business, and government. He has been a professor and provost (California Institute of Technology), an industry chief scientist (BP), and since last year a federal bureaucrat. At the DOE, Koonin is the science office’s chief research officer. If you count last year’s American Recovery and Reinvestment Act, he has influence over $100 million in funding for energy-related research, loans, and loan guarantees.

Koonin offered a broad perspective in his session opening the series. Center director and climate scientist Daniel Schrag said that the next lecture — coming Oct. 12 by an executive whose company makes tiny $2,000 cars — will get down to the details of managing Earth’s energy future.

Koonin told a capacity crowd at Science Center D that the U.S. energy business is complex, operates by calculating risk and profit in the long term, and approaches innovation slowly and conservatively. After all, he said, any decision on technology will create infrastructures — and costs — that last for decades.

“The energy business is not simple,” said Koonin, “and the people in it are not troglodytes.”

Nor are they venture capitalists, said Koonin. In that economic sector, risk and innovation are king, but profits get taken fast. “Exit time” is measured in years, not decades. And average funding pools — at $150 million — are not enough to prompt scaled-up change in energy systems. “The energy business,” said Koonin, “is not the venture capital business.”

He said government does not have sufficient capital of its own to scale up the needed changes in energy systems, which remain largely in private hands. Change only will happen if it is profitable or mandated, said Koonin. Government tax credits are powerful incentives for change, he said. Wind industry installations went up when the credits were in place, and slipped when the credits disappeared.

Government can also play a big role in the essential steps that Koonin outlined to improve energy security and reduce greenhouse gases. Among them:

Changing energy systems is difficult and slow, said Koonin, who reviewed the historical record from 1850 onward. Industry favors change on “decadal time scales,” he said. The gas-scrubbing systems for coal plants, for instance, took 40 years to develop and perfect.

But government can help industry to manage the capital risk of energy innovation, said Koonin, and is already accelerating invention in what he called “a new set of research structures.” These include a network of national labs, the federal “energy hub” concept, and, for short-term projects, the federal Advanced Research Projects Agency — Energy.

Koonin’s decades of research often involved large-scale rapid computing, so he sees another bright side to the energy innovation picture: big and fast computer simulations of the kind that in the 1990s were used to replace U.S. nuclear testing. That alone, he said, accelerated computer technology by a factor of 10,000.

The same predictive simulation capability can be focused on U.S. energy issues, said Koonin. “We need to do more of this, faster.”