Looking past the plantation 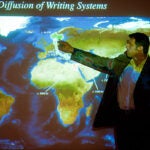 Focus broadens to include greater understanding of Africa

In 1836, Frank McWorter founded the town of New Philadelphia, Ill. McWorter, who owned a large farm nearby, used the sale of lots in the town not to enrich himself, but to buy his family out of slavery in the nearby South.

McWorter, who was a former slave, purchased the freedom of 16 family members. Even so, the town he founded eventually failed due to what archaeologists believe was a racially inspired diversion of a proposed railroad from the town, making it a backwater whose residents eventually left.

In an effort to understand more about McWorter’s extraordinary story, archaeologists are engaged in digs at the town site, incorporating new technology and driven by the enthusiasm pervading the field, according to Christopher Fennell, a University of Illinois archaeologist who spoke Monday (Sept. 20) at the Knafel Building as part of the Harvard Africa Seminar.

Fennell is leading efforts to uncover New Philadelphia’s remains beneath 18 inches of soil churned by decades of agricultural use. He told students that studies of enslaved Africans and their descendants should focus on such areas as the fields of Illinois, as well as the plantations of the South, the sunken wreckage of slave ships that made the horrific Middle Passage, and Africa’s own history.

Recent decades have seen major growth in the field of what in the 1960s was descriptively called “plantation archaeology,” whose focus was on understanding the life of slaves through the conditions in which they lived. That focus has gradually broadened to encompass their journey out of slavery, including locations like McWorter’s tiny community.

Today, Fennell said, the field is at an interesting point. Breadth and complexity have continued to grow, spawning questions about whether there should be separate studies of the African diaspora and of African history, or whether they should be merged.

Typically, he said, researchers studying the history of today’s African Americans pursue particular topics in the United States and trace them back to relevant events in African history. But he said that those going into the field might be better served if they first build a foundation of African history — allowing them to understand the cultural background that enslaved Africans brought with them — and then move forward to examine what happened in this country.

As the field widens, it is becoming African-Atlantic studies, encompassing the African continent and the dispersal of people to the Americas through slavery, as well as more focused studies of what happened to Africans after they arrived here.

There’s a great deal of energy in the field today, Fennell said, as well as new technological tools. The remains of African slaves in Campeche, Mexico, for example, were traced to their homeland in Elmina, Ghana, using unique chemical isotopes locked in tooth enamel during childhood. That finding, announced in 2006 and dated to the 1500s, provided evidence that African slaves were brought to the New World not long after it was discovered.

Similarly, Fennell said, the 1991 uncovering of the New York African Burial Ground during construction allowed DNA analysis of more than 400 bodies that had to be moved. Analysis of mitochondrial DNA extracted from 32 individuals allowed the tracing of their mothers’ line back to Africa.

“This actually is a period of tremendous energy and tremendous questions being asked,” Fennell said.