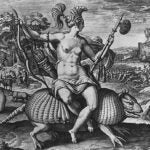 “Visible Language,” a semester-long lecture series sponsored by the Peabody Museum of Archaeology and Ethnology at Harvard University, will probe the origins and development of writing. Experts will look at the earliest writing systems — from China, Egypt, and Europe to those of the Mediterranean area, Mesoamerica, and Mesopotamia.

Going back that far yields an immediate surprise, said linguistic anthropologist Marc Zender, who opened the series Sept. 16 at the Geological Lecture Hall. Writing was “independently invented several times in human history,” he said, and yet it was invented “in strikingly similar ways.”

In every system, specific signs are used to communicate sounds, words, and ideas, said Zender, a Harvard anthropology lecturer and Peabody research associate who specializes in deciphering Aztec and Mayan. All writing systems, he said, show a “diverse oneness.”

The phrase comes from “Visible Speech: The Diverse Oneness of Writing Systems,” an influential 1989 book by American linguist John DeFrancis. It was one of many books outlined in Zender’s talk, which provided a sort of reading list for the series. Among them were “Writing Without Words” (1994), “Mother of Writing” (1990), “The First Writing” (2004), and “The Disappearance of Writing Systems” (2008).

Though writing “arrests” something as mundane as speech, ancient peoples regarded it as a medium of the divine, he said. One of his slides showed Thoth, the ibis-headed Egyptian god who was credited with inventing writing. Another depicted Maya scribes, the “supernatural, angelic beings,” said Zender, whose writing was considered an act of divine creation.

But today, writing is everywhere, part of every culture, and almost anyone can do it. Yet it remains, said Zender, “the single most important vehicle of cultural transmission between generations,” a way for one age to talk to another.

“Writing,” he said, “allows our words to outlive us.”

Zender reached back 6,000 years and more to humankind’s earliest writing systems. But he also took the time to dispel some contemporary myths:

Despite the myths, humans through the millennia evolved “strikingly similar ways of recording sound and meaning,” said Zender. How could this be?

One possible answer still has to be explored by linguists and neuroscientists, he said. There may be innate features of the human brain that underlie a cognitive rationale for the similarity of writing systems.

Another answer may be simply that the earliest written records were meant to be “administrative and utilitarian,” said Zender. That would account for writing’s free mix of numerals, words, and names signifying ownership.

Names are an apparent universal leitmotif in the development of writing systems. Zender showed a picture of one ornate polychrome vase from eighth century Mesoamerica. Ornate symbols along the top have a simple meaning: “It is the drinking cup for chocolate of K’ahk’ Tiliw Chan Chahk.”

A Vimose bone comb from Denmark, circa A.D. 150, is decorated by a scrawl that reads, “Harry’s comb.”

Medieval runic name tags, salvaged from a Norwegian archaeological dig and designed to be tied to goods, are a metaphor for property rights. One reads, “Erik owns this.”

“Language is uniquely human,” said Zender, wrapping up his talk, and part of that is “signaling group and individual identity.”

Writing may have been invented to do the same thing. To say, in effect: “I am here. We are here.”

Future talks in the Visible Language series will look at the development of Chinese writing (Oct. 6), cuneiform script (Oct. 13), Egyptian hieroglyphs (Nov. 18), and the early history of the alphabet (Dec. 2).

The lectures begin at 5:30 p.m. Most are in the Geological Lecture Hall, 24 Oxford St. For more information.