‘It is within our grasp’ 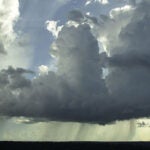 Big gains in search for life beyond Earth, astronomer says

With a bit of luck and a new space telescope, within five years we could know the answer to a question that humanity has pondered for millennia: Is there life beyond Earth?

With initial results from the planet-finding Kepler satellite to be released in coming months, and the prospects of taking a closer look at those planets in the coming years with the Webb space telescope, Harvard-Smithsonian Center for Astrophysics (CfA) astronomer Lisa Kaltenegger said the chance for discovery of small, rocky Earth-like planets with the potential to harbor life is pretty good.

“It is within our grasp to do this,” Kaltenegger said during a talk Wednesday (Sept. 15) sponsored by the Harvard Origins of Life Initiative.

Kaltenegger’s enthusiasm for her subject was reflective of the current excitement among astronomers who’ve spent years searching for planets around other stars. A major focus has been to answer the question of whether there are other Earth-like planets out there and whether those planets might harbor life.

Recent advances in technology and technique have put those answers just beyond our fingertips. Kaltenegger’s optimism stands on three scientific legs.

The first is the Kepler Mission. Kepler is a space telescope launched in 2009 that is dedicated to finding small, rocky planets around other stars. Like Earth, such planets are thought to have the best chance of harboring the conditions favorable to life. In June, Dimitar Sasselov, co-principal investigator of Kepler’s science mission and professor of astronomy at the CfA, announced that Kepler has already found more than 700 candidate planets. Researchers are conducting follow-up studies and expect to announce how many of them are confirmed in the coming months.

The second leg will be the James Webb Space Telescope. Set to be launched in 2014, Webb has a 6.5-meter mirror, which Kaltenegger said is large enough to let scientists take a closer look at the planets found by Kepler.

The third leg is the ability of scientists to read the atmosphere of planets around other stars. As first demonstrated in 2007 by Harvard astronomy professor David Charbonneau and colleagues, researchers can measure the light coming from the star as the planet passes in front of it. By looking at how the starlight is altered when it passes through the planet’s atmosphere, scientists can tell what the atmosphere is made of.

The presence of certain compounds in the atmosphere is indicative of life, Kaltenegger said, because on Earth at least, the compounds are either important for life or present in the atmosphere because of living things. One of the biggest is oxygen, which is released by plants and microbes during photosynthesis. Other chemicals that are potential signatures of life include methane, carbon monoxide, and nitrous oxide, which are produced by bacteria. Water vapor is another important signature to look for, because water is important for life on Earth.

“I love biota, but what I love even more is biota that modifies the atmosphere,” Kaltenegger said.

Other factors will be important as well, Kaltenegger said. A planet’s orbit has to be in the so-called Goldilocks Zone — not too close to the star, which would make it too hot to support life, and not too far away, which would make it too cold. Where the planet is in its evolution is important as well, Kaltenegger said. The composition of the Earth’s atmosphere has changed over time, with six very distinct epochs that would show up differently to observers looking at the Earth from far away. Fortunately, Kaltenegger said, the Earth’s example has shown that the conditions favorable to life aren’t fleeting; some signs have existed in the Earth’s atmosphere for two billion years.

Major volcanic events may also be possible to detect, Kaltenegger said — explosions 10 to 100 times the Mount Pinatubo eruption should be detectable. Since volcanism and plate tectonics are thought to be important geologic processes supporting life, Kaltenegger said, they are another indicator that can be viewed from far away.