Funding for the future 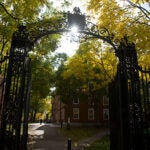 Six faculty members, working on three separate projects, were named recipients of the NIH Director’s Transformative Research Project Award Thursday (Sept. 30). The awards are aimed at “truly daring” projects by scientists rethinking the way science is conducted, according to the NIH.

“Complex research projects, even exceptionally high-impact ones, are tough to get funded without the necessary resources to assemble teams and collect preliminary data. The TR01 awards provide a way for these high-impact projects to be pursued,” said NIH Director Francis S. Collins.

The second award program, the New Innovators Awards, supports young scientists conducting work on highly creative scientific approaches that may be at too early a stage to qualify for more traditional NIH funding. Recipients include Adam Cohen, an assistant professor of chemistry and chemical biology and of physics; Peng Yin, assistant professor of systems biology at Harvard Medical School (HMS); Sandeep Robert Datta, assistant professor of neurobiology at HMS; Nathalie Agar, instructor in surgery at HMS and Brigham and Women’s Hospital; and Conor Evans, instructor in dermatology at HMS and Massachusetts General Hospital.

Xie and Zhuang, who are both members of the Chemistry and Chemical Biology Department in the Faculty of Arts and Sciences, are seeking to advance understanding of protein function in cells and how disease disrupts that functioning. Both are experts at single-molecule biology and have developed several tools to image and probe what’s going on with individual molecules.

“In this joint grant, Sunney and I propose to determine the dynamic cellular architecture of the entire proteome of the model bacterial organism E. coli by combining single-molecule detection, super-resolution imaging, and systems biology tools,” Zhuang said. “A global view of the cellular architecture of bacteria will bring new paradigms to the microbiology field and potentially suggest new therapeutic targets for treating bacteria-based infectious diseases. Moreover, the super-resolution imaging and systems biology tools developed in this project will also broadly benefit biomedical research.”

Arlotta, Joung, and Zhang are working on a project that seeks to regenerate specific components of the nervous system as a way to treat neurodegenerative diseases. Among the methodologies is one being developed in the Joung lab to create customized proteins that can bind to genetic sequences, allowing them to edit the sequences and change the expression of specific genes.

“We are exploring the uses of this technology both for biological research and for the treatment of genetic-based diseases,” Joung said.

Dove, working with Bryce Nickels at Rutgers, The State University of New Jersey, is working to challenge conventional ways to make RNA by investigating the role of tiny fragments of RNA, called nanoRNAs, in initiating transcription in cells.

Cohen is seeking ways to monitor the electrical activity in a large number of neurons at once to better understand neural function. He’s working to create an artificial protein based on the microbial green proteorhodopsin protein that flashes with fluorescent light when activated. Once developed, the gene for the protein can be inserted into neurons, which would provide a flash of fluorescence each time the neuron fires. Molecules that have previously been developed for this purpose lack both the sensitivity and speed that Cohen hopes to get from the proteorhodopsin proteins.

“I am profoundly grateful” to receive this award, Cohen said. “We are trying a very risky project, in an area that is new for my lab. It would be almost impossible to fund this work through conventional means. Now we have the freedom to give this our best shot for the next five years. I’m really excited.”

Yin, a core faculty member of the Wyss Institute for Biologically Inspired Engineering at Harvard, is the principal investigator for the Molecular Systems Lab at Harvard, a group of scientists and students interested in engineering programmable molecular systems inspired by biology. The group plans to use the award to advance one of the tools most essential to biological and medical research, the imaging probe.

Imaging probes translate a cell’s invisible biological information, such as proteins or RNA molecules, into viewable signals, such as a change in fluorescence. The information provided by these fluorescent markers helps researchers to understand better the role of cell behavior in the onset of diseases, such as cancer, and their progression.

Yin is proposing a novel type of bioimaging probe, one based on “triggered” molecular geometry. Such a probe would assemble itself into a prescribed, identifiable three-dimensional geometric shape upon detecting a target molecule. This new approach has the potential to enable the imaging of a dramatically larger number of distinct molecular species in a single cell, thus providing researchers with a much richer, more accurate view of what is happening in a cell.

Yin said the award “will allow my group to undertake an audacious research plan. Working in the highly stimulating environment of the Wyss Institute, … we hope to advance the vision of engineering programmable molecular systems to provide tools for addressing important biomedical challenges.”

In neurosurgery for brain cancers, the main objective is to maximize removal of the tumor while preserving healthy tissue. Agar’s project aims to develop and implement a real-time molecular analysis of the tissue involved, using three-dimensional mass spectrometry in combination with radiology imaging as a guide for neurosurgery. The project involves a cross-disciplinary, multi-institutional team, with groups from Brigham and Women’s Hospital, Purdue University, and the Georgia Institute of Technology, as well as industrial collaborators.

The grant gives the effort the recognition and opportunity to make progress in developing and implementing the technology, Agar said. A further goal is to create portable tools that may be used in operating rooms that don’t have the same level of imaging that is available in highly specialized centers.

Evans’ research is focused on developing optical approaches for detecting, understanding, and treating therapeutically resistant metastatic cancer.  Although much progress has been made in detecting and treating cancer, metastatic cancer, which has spread through the body, remains the leading cause of death in patients with advanced cancer. In ovarian cancer, 90 percent of all fatalities arise from microscopic, difficult-to-visualize lesions that often resist treatment. A lack of oxygen, known as hypoxia, is a major cause of treatment resistance in cancer, and is likely responsible for resistant ovarian disease.

Evans hopes to overcome hypoxia-induced resistance by developing a new microscopic and translational imaging approach for battling metastatic disease. He plans to map the detailed relationship between hypoxia and therapeutic response by developing new oxygen-imaging probes, high-throughput microscopy platforms, and multimodal microendoscopes to directly visualize treatment resistance. Furthermore, to fight treatment resistance, he hopes to develop an oxygen-independent therapy that improves the survival of women with ovarian cancer.

“As a young investigator and new faculty member at Harvard, I am excited to receive the New Innovator award, as it provides an unparalleled opportunity for me to pursue my research goals in fighting treatment-resistant metastatic cancer,” Evans said. “This award gives me the resources to explore the underlying relationships between hypoxia and resistance in cancer, which will allow us to better understand therapeutic resistance and build more effective therapies for patients.”

Datta studies the mammalian sense of smell for insights into how the brain extracts information from the environment and converts that into action. He is specifically interested in odors that cause innate responses, those that are of critical importance to an animal, such as the odor of food, of a predator, or of a mate. These odors may be processed by special receptors in the nose, unlike the complex combinations of receptors that process other odors. This simplifies the still-complex task that Datta and members of his lab have undertaken, which is to link specific odors to certain neural circuits and to understand how electrical signals in that circuit then lead to specific animal behavior.

“This grant will enable me to perform the next generation of experiments today instead of five years from now, and give me the freedom to follow the science wherever it leads,” Datta said. “It is gratifying to be given the opportunity to freely explore the complexities of the brain without the tether of constantly searching for funding.”