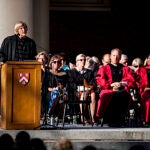 The daily ritual of Morning Prayers, a time-honored tradition that dates to Harvard’s founding in 1636, resumed Wednesday (Sept. 1) with an address by Harvard President Drew Faust, who welcomed new students by suggesting they relax into their new lives and expand the University’s diversity.

Delivered in Appleton Chapel, which was bathed in soft September light on the first day of classes, Faust’s message to the students, faculty, staff, and members of the community was one of inclusion.

Earning a chuckle from the crowd, Faust acknowledged the anxiety of some incoming freshmen, who may have an underlying fear that the Admissions Office made an egregious clerical error and admitted the wrong person. She also understood their broader fear about simply fitting in.

“To those new Harvardians, I say, this is your place; you are here because we chose you, we believe you belong.”

In a new arrangement, Faust stood at the pulpit now placed in front of the chapel’s large Palladian window, finally exposed after years of being hidden by the church’s Fisk Opus 46 organ. The instrument was recently dismantled, and shipped to a new Presbyterian church in Austin, Texas, replaced for now with a portable model.

In her remarks, she recalled how Harvard’s own sense of acceptance has changed over time, commenting that women had no equal role for much of its long history. Faust remembered the words of her contemporary, the distinguished journalist Linda Greenhouse from the Radcliffe Class of 1968, who said the “basic fact of our existence within the Harvard community was that we were not the norm. We were the deviation from the norm.”

When African-American leader Booker T. Washington received an honorary degree from Harvard in 1896, he remarked, said Faust, that he “felt like a huckleberry in a bowl of milk.” And Harvard’s first black Ph.D., W.E.B. Du Bois, said, “that he was in but not of Harvard.”

But Faust said Harvard has striven to expand “opportunities for belonging, challenging not just our own institutional assumptions, but working to become an agent of change and openness in society more broadly.”

Faust challenged both the University and its students to continue working to ensure that students of “every race, gender, and circumstance” know that they belong in the Harvard community. Increasing the African-American faculty, honoring and supporting ROTC students, and advancing the passage of the DREAM Act are all ways of expanding “Harvard’s trajectory of belonging,” she said.

That trajectory is “a promise of inclusion and participation that is at the heart of who we are, and a promise that we must dedicate ourselves to fulfill.”

As always, the brief service was accompanied by musical selections from the Choral Fellows of the Harvard University Choir, led by Edward Elwyn Jones, the Gund University Organist and Choirmaster.

The Rev. Professor Peter J. Gomes, the Plummer Professor of Christian Morals and Pusey Minister in the Memorial Church, offered a reading from St. Paul’s First Letter to the Corinthians, echoing Faust’s message.

“Strive for the greater gifts,” he read, “And I will show you a still more excellent way.”