A master of motion 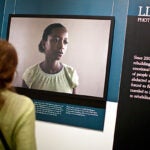 Aftermath of a world at war

“Listen to your body, feel the gravity, feel the weight,” he urged, as students in the Office for the Arts’ Dance Program worked on a turn. “Yes,” he encouraged excitedly when they responded, “that’s dancing!”

Nissinen, artistic director of the Boston Ballet, was on campus Sept. 2 to offer a master class for the Harvard students — aspiring professional dancers, and those just looking to perfect their craft.

Each year, visiting dance artists teach classes at Harvard as a complement to the robust series of classes offered by the program, including ballet, contemporary, theater, and modern dance. The Office for the Arts also offers master classes in art forms throughout the year.

Despite a heat wave and steamy temperatures in Harvard’s Dance Center and Director’s Studio on Garden Street, about two dozen students took part in the class, which offered observers an inside look at the grueling work involved in ballet.

The chance to take classes with a range of accomplished dancers and directors has been an important part of the overall Harvard experience for senior Natalie Cameron. The Cabot House resident, who is co-captain of the Mainly Jazz Dance Company at Harvard, hopes to pursue a dance career in musical theater after college.

“For a dancer, it’s always great to have extra classes, especially ballet classes for training and technique, and the fact that they offer it is just fabulous,” Cameron said.

Also taking part in the class was Elizabeth Bergmann, a longtime director of the dance program and a lecturer in dramatic arts. Credited with expanding dance instruction into the Faculty of Arts and Sciences curriculum during her Harvard tenure, Bergmann will retire in February.

As he helped students with their technique, perfecting their pliés and tendus, Nissinen also tried to help them to listen to and connect with the music, gently encouraging their appreciation for the rhythms.

“Listen to the music. The music tells you more than you think,” he said.

Strong imagery also played an important part in the class, as well as a healthy dose of humor.

“Dance like the demons are chasing you. You want to get away. Go, go, go,” Nissinen told the students. Later, he complained that they weren’t having nearly enough fun. Observing that the faces on his young students were grim with concentration, he wondered, “Who died? Enjoy, go for it!”

Later, the students gathered round Nissinen for a question-and-answer session. As they stretched on the floor, the artist who began his own professional career at age 15 with the Finnish National Ballet offered them advice. To a young student who wanted to know his opinion on the most important thing for a dancer, he said simply: “Be interesting.”