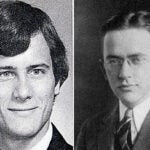 New justice remembered for her work as student, professor, dean

The U.S. Senate confirmed former Harvard Law School (HLS) dean Elena Kagan today (Aug. 5) as the fourth woman to serve on the Supreme Court. In a series of interviews, Kagan’s former Harvard colleagues, former teachers, and friends lauded the choice, provided insights into the woman they’ve known for decades, and explained why they believe she will be a standout jurist.

The onetime colleagues agreed that Kagan has a razor-sharp mind, which they said is matched by a bright sense of humor, graciousness, thoughtfulness, and patience, along with a love of sports. They described her as a fine conversationalist and storyteller with a quick wit, to the point where a seat next to Kagan at a dinner party is a coveted spot.

HLS Dean Martha Minow, who first knew Kagan when the new judge was a student, called her “incredibly impressive even back then.” Minow, who is also the Jeremiah Smith Jr. Professor of Law, said that when Kagan eventually became dean, “She judiciously used humor to lighten potentially tense moments in faculty meetings, and has a real knack for drawing people out in conversation. She is unpretentious and warm. At heart, she is a problem solver, and she can’t help getting to the heart of any problem through her questions.”

A New York City native, Kagan earned an undergraduate degree in history from Princeton University in 1981. In 1983 she received a master’s in philosophy from Oxford University. She attended HLS and graduated in 1986 with honors. She clerked for Judge Abner Mikva of the U.S. Court of Appeals for the D.C. Circuit, and for U.S. Supreme Court Justice Thurgood Marshall. From 1991 to 1995, Kagan taught at the University of Chicago Law School. From 1995 to 1999, she served the Clinton administration as associate counsel, deputy assistant to the president for domestic policy, and deputy director of the Domestic Policy Council.

Known as a powerful dean, Kagan increased financial aid for law students entering public service after graduation, hired an array of prominent faculty members, and excelled at fundraising for the School. She also took steps to improve student life, bringing a volleyball court and skating rink to campus, and providing free coffee.

Dean Kagan also “very vigorously pushed to diversify the Law School student body even more, by recruiting some of the best and brightest students of color from around the country and around the world,” said Charles Ogletree, the Jesse Climenko Professor of Law.

Her former colleagues gave Kagan high marks for her intellect, analytical skills, and readiness for the top court. They said Kagan, an authority on administrative and constitutional law, has the ability to absorb and process what most people would consider an overwhelming amount of information, and then sift through it to create a nuanced analysis.

Carol Steiker, the Howard J. and Katherine W. Aibel Professor of Law and a longtime friend of Kagan, said her colleague was thoughtful and was quick to thank those who helped her or the School, sending them kind, personalized notes. She often surprised colleagues with considerate gifts.
“She is very curious about the world and about other people … she is also very funny
and very down-to-earth,” said Steiker.

Steiker first met Kagan under somewhat adversarial circumstances. As students, both were vying for the top spot at the Harvard Law Review and ended up in a runoff, one that Steiker won. Unsuccessful candidates in such tightly contested elections sometimes got “sulky, undermining, and retaliatory,” Steiker said. But not Kagan.

Steiker said the runoff “was competitive without it at all being ugly. It says a lot about Elena … [she] does not lose very often in her life.”

Kagan went on to take the second-in-command slot at the journal, and the two women quickly grew close, toiling tirelessly through the summer to finish leftover publication work so they could launch their first issue on time that fall.

“We were very good friends and colleagues in Law School,” Steiker added.

Later, when both clerked in Washington for Marshall, Steiker said that when she and some colleagues would take a break by working out to a Jane Fonda exercise tape, Kagan would play basketball on the top floor of the Supreme Court Building, on the aptly named “Highest Court in the Land.”

“Don’t let the term ‘Shorty’ fool you,” said Ogletree of the nickname given to Kagan by Marshall. “She has a devastating layup and jump shot.”

Ogletree said that when Kagan came to HLS he quickly learned not to play basketball with her for fear she would pull a tricky move and he would “end up getting called with a flagrant foul.”

Echoing Ogletree, Steiker stayed away from another game involving Kagan: poker. “She used to play poker, and I quickly learned not to do that because she is a good poker player,” Steiker said.

Kagan’s insight and intellect were evident early to a young HLS professor who had her as a student. Richard Fallon, the Ralph S. Tyler Jr. Professor of Constitutional Law, was in his third year teaching “The Federal Courts and the Federal System,” a class involving dense, intricate rules and technical details.

“I can remember seeing Elena’s hand go up and feeling my heart skip a beat, and a little bit of wobble in my knees, because I knew that what she was going to say was going to be incisive, but it was incisive not in the ‘Hey professor, I’ve got a neat thing to throw into the mix [kind of way],’ but some probing question. … I was still in the stage where students were hitting me with things I hadn’t thought about before, and Elena hit me with as many intelligent, cogent points that I had never considered before as any student that I have ever had.

“From the beginning of the time that I knew her, I have thought that she had one of the most powerful, analytical intelligences of anybody I have ever met.”

Eventually, Fallon served on a number of academic appointment committees with Kagan when she was dean. He said she had an impressive ability to grasp not only the academic work of a faculty candidate, but also to absorb the comments made by each committee member before passing her own judgment.

Though he was quick to add that assessing the scholarship or strengths of a potential hire is not the same as deciding legal cases, Fallon said Kagan brought a “thoughtfulness and judiciousness” to the deliberative process.

Ogletree, who thinks Kagan will be a moderate justice who will “work within the constraints of the law,” said her intellectual curiosity is one of her key qualifications for the job.

“There is no area where she won’t have an intellectual curiosity, and a willingness to dive in and learn more about the role the Constitution plays in so many areas.”

Steiker recalled that Kagan, when she worked at the Law Review, was “an extraordinary editor, just a brilliant mind, who could map out an idea like some amazing cartographer. Her mind could see the whole thing, the whole shape of a complicated piece of legal scholarship or set of arguments.”

“One of my colleagues once described another colleague as having a mind like a bell,” Steiker said, “and I always thought of that description as being very apt for Elena, just the clarity of her thinking, even about issues that are extraordinarily complex. It’s really striking.”