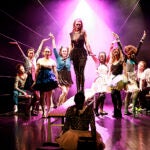 In 1944, Joseph Beuys was a rear gunner in a Luftwaffe Stuka dive bomber on a mission over the snowy Crimea. The plane was shot down, and the pilot was killed. But the 22-year-old Beuys, battered and unconscious, was rescued, he later claimed, by Tatar tribesmen who wrapped him in layers of felt and animal fat to ward off the cold.

True or not, the story became a centerpiece in Beuys’ personal mythology, a dramatic backdrop to the acclaimed career he later had as a sculptor and pioneering performance artist. (In one performance piece, he lived for three days in a cage with coyotes. In another, he carried a dead hare through a gallery of paintings, whispering the meaning of each one to the cradled body.)

The totemist Beuys was one of four German artists featured in “Painting and Sculpture in Postwar Germany,” a Harvard Art Museums gallery discussion held Aug. 28 and led by curatorial assistant Joanna Wendel ’09. (A series of discussions is scheduled for the fall, starting Sept. 23. For more information, visit the Harvard Art Museums calendar.)

Three of the featured artists were men marked by the direct experience of war: the wounded Beuys (pronounced “Boys”); Gerhard Richter, who was 13 at war’s end; and Georg Baselitz (born Hans-Georg Kern), who as a boy of 7 witnessed the firebombing of Dresden.

The fourth was Rosemarie Trockel, whose art was forged in the gender wars. She makes sculptural art that mocks the male-dominated tradition of painting. Trockel’s field of combat is the conflict between the masculine and the feminine. Her weapon is irony.

In their own ways, the artists come to grips with complex issues in postwar Germany, including disorder, shame, ravaged nature, and the inequalities of an artificial political border.

Richter and Baselitz both trained as artists in communist East Germany. Richter fled to the West in 1961, two months before the Berlin Wall went up. Baselitz, booted from his Soviet realism art school for “political immaturity,” moved to the West in 1957, where he marveled at untrammeled modern artists such as Willem de Kooning and Jackson Pollock.

But Baselitz had no desire to follow the lead of abstract expressionism. During the 1960s, he turned defiantly back to his own brand of representational art — “fracture paintings” that seemed to celebrate the disorder of his wartime childhood. (Later, many were even painted, or at least displayed, upside down.)

The postwar anger of “Curly Head” is reflected more subtly in Richter’s “Table” (1962). The table in question, painted from one of many photographs the artist collected, is obscured by a swirling central smear. It looks like darkroom chemistry gone awry.

This smear overwrites the painting’s photographical order and precision, just as war overwrites the order of life and culture. Richter’s personal displacement revealed a schizophrenic war. He lost a Nazi uncle to combat, and a mentally disabled aunt was imprisoned in one of Hitler’s euthanasia camps.

More broadly, said Wendel, photography was a threat to artists from the 19th century onward, and Richter “confronts this problem in a very interesting way.”

Also featured was Beuys’ iron sculpture “Back Support for a Fine-Limbed Person (Hare-Type) of the 20th Century A.D.” (1972). The artist’s fascination with fertile, abundant hares arises again. (Hung on a wall, said Wendel, the sculpture resembles a pelt.)

But the medium is ironic, a sculpture made of iron but molded from a cloth back support meant for comfort. Up close — pitted, jagged, rusted, and as brown as old blood — “Back Support” is drained of any intimations of comfort: It looks like bomb shrapnel.

Trockel’s blood-red “Shutter (c)” (2006) is shrapnel of another sort, cast off from a cultural war between men and women that the artist has embraced with irony and humor. Hung at mirror-height, the piece is a shiny ceramic rectangle cast from a slab of meat.

Gaze at it, and a shutter opens fast on the implied metaphor: Women are for consumption.