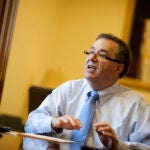 Former Harvard guard and three-time All-Ivy League honoree Jeremy Lin ’10 has signed a multiple-year professional contract with the Golden State Warriors of the National Basketball Association (NBA). Lin is attempting to become the first Asian-American player to play in the NBA since Rex Walters was a member of the Miami Heat in 2000.

Lin is also in line to be the first Ivy League player to play for an NBA team since University of Pennsylvania’s Matt Maloney suited up for the Atlanta Hawks and Yale University’s Chris Dudley was a member of the Portland Trail Blazers in 2003. In his first game with the Warriors, Lin will join former Harvard standouts Saul Mariaschin ’47 (Boston Celtics) and Edward Smith ’51 (New York Knicks) as Crimson players who have seen time in the NBA.

A native of Palo Alto, Calif., who guided Palo Alto High School to a state championship, Lin will now join his hometown professional franchise. Lin recently averaged 9.8 points, 3.2 rebounds, 1.8 assists, and 1.2 steals per game while playing with the Dallas Mavericks Summer League team earlier this month. He scored 13 points against the Washington Wizards on July 15 and enjoyed a pair of 12-point efforts against the Denver Nuggets on July 9 and the Sacramento Kings on July 18.  Lin, who stands at 6’3”, also shot 54.5 percent from the floor and 66.7 percent from behind the arc while averaging 18.6 minutes in those five games.

As a senior in 2009-10, Lin, 21, was a finalist for the Bob Cousy Award, which goes to the nation’s top point guard as well as the John R. Wooden Award for the national player of the year. A four-time Ivy League Player of the Week honoree this past season, Lin led the Crimson in scoring as a senior with 16.4 points per game. He also paced Harvard with 4.6 assists per contest and topped the Ancient Eight with 71 steals, marking the third straight year he finished first in the Ivy League in steals. Harvard also enjoyed the program’s winningest season in 2009-10, as the team recorded 21 victories and qualified for the postseason for the first time since 1946.

A U.S. Basketball Writers Association and National Association of Basketball Coaches all-district team honoree, as well as a Lou Henson All-America selection, Lin completed his Harvard career as the only player in Ivy League history to record 1,450 points (1,482), 450 rebounds (494), 400 assists (406), and 200 steals (225). Lin helped rewrite the Harvard record books, as he finished his career first in all-time games played (115) and was second in steals and fifth in points and assists.

For more on Crimson athletics.