From scorched lot to library park 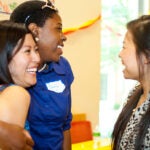 Their sails are set

Children view up close the redevelopment plans for Allston site

It’s an exclusive club. Membership is hard to come by. Besides, it’s a lot of work.

The Library Park Construction Club, an enthusiastic group of 7- to 10-year-olds, is taking the hands-on approach to watching its beloved Honan-Allston Branch Library get a facelift.

About 20 kids braved the afternoon’s heat yesterday (July 7) to visit their neighborhood library and take part in an interactive session that took them beyond the storied stacks of the library and into a vacant field behind it.

The field — a 1.74-acre of sun-scorched grass where a concrete plant used to sit — is about to become an inviting oasis of green through the creation of Library Park, slated to open next year. Construction is scheduled to begin next week with the help of Harvard University, its landscape architects and designers, and, of course, those local experts.

“Is it going to be like a playground?” asked one eager child as designers Dennis Swinford and Emily Mueller De Celis showed the club architectural plans, including aerial photographs. “Is there going to be a fountain?” another asked. The park will be sort of like a playground, said Swinford, and there will be a fountain, the Harvard planner enthused. What’s a park without one?

“A park and a library work really well together,” said Mueller De Celis, a senior associate at Michael Van Valkenburgh Associates. “We wanted to think about spaces where you could go and read a book.”

“A lot of people said the back part of the library isn’t that pretty,” said Swinford referring to feedback received from the community during the park design process. “So there will be flowers everywhere. This is going to be a special park.”

The park’s plans paint it as a large green space, with a hill, winding paths, seating, and open lawns for reading and gatherings. A rain garden is even incorporated, a dedicated area where all rainwater is collected into a stream that will feed plant systems thriving on wet roots.

Children’s librarian Sherry Eskin sees great potential in Library Park. “I think the park will provide a great educational space for story time and other programming. The library has a few courtyards, but it’s good to have more.”

Swinford and Mueller De Celis invited the club outside to imagine what the field will soon become. With a map of the future park, the kids used landscape markers to flag landmarks like the event lawn and an outdoor classroom.

This was the club’s first of six weekly sessions designed to introduce the children not only to the park, but to teach them about soil, trees, and other design and construction elements.

“We just like to hang out and have fun,” added Ciliberto.

Nearly all of the kids were imagining big future plans for the park’s use.

“In this new park, I hope there’s lots of shade because it’s hot,” said 8-year-old Ava Healy. “The rain garden sounds really fun because I want to go in. And I might roll down the hill, and maybe I’ll read a book on the hill.”

The sessions take place Wednesdays at 2:30 p.m. at the Honan-Allston Branch Library through Aug. 11. Sign up in advance by calling 617.496.6688, or e-mail deirdre_keady@harvard.edu.