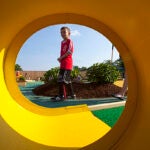 At Harvard ‘lawn swap,’ the idea is to go green by reusing

Are you trying to hold back disaster on a warming planet? Small, personal steps — measured collectively — can have great meaning. That’s why Harvard sustainability officials have a message for you: Swap rather than shop.

The lesson was free on Monday (June 21) at a University-wide “lawn swap” under a big tent in front of the Science Center. The operative idea was “freecycling,” the exchange of reusable goods at no cost. The “seller” gives something away, and the “buyer” takes something away. For free.

“So many people came over thinking it was a yard sale,” and were surprised that no cash was involved, said co-organizer Gosia Sklodowska of Harvard’s Office for Sustainability (OFS). “They had to triple-check with us.”

Sklodowska, who manages the greenhouse gas reduction program at the Faculty of Arts and Sciences (FAS), stood under the big open-sided tent, where sweet breezes and welcome shade were free too. Nearby was the Farmers’ Market at Harvard, open Tuesdays in Cambridge, with its celebration of local goods. “We wanted to keep the same spirit,” she said of the local giveaway.

Co-sponsors of the swap included OFS, the FAS Green Program, Harvard Law School (HLS), Harvard School of Engineering and Applied Sciences (SEAS), and Harvard University Operations Services, which oversees campus recycling and a redistribution program for used furniture every Thursday. The Harvard Extension School donated use of the tent.

Harvard staff members — those with extra supplies or those needing them — were the swap’s target audience. But anyone was invited to give and take, for home or office. Tables held file folders, printers, books, lamps, music CDs, art supplies, clothes, sports equipment, and more.

Only one prohibition applied: No computers, televisions, large electronics, or furniture, things that could have other destinations. For those big items, organizers suggested Craigslist, the Harvard ReuseList, Harvie’s List classifieds, or the Law School’s HLSFreecycle@lists.law.harvard.edu.

There are environmental benefits to swapping reusable goods “on many fronts,” said Sklodowska. It reduces waste so that unwanted stuff doesn’t wind up in the trash. Freecycling also eliminates the environmental costs of making new products, including the fossil fuels needed to extract raw materials, manufacture goods, and transport them.

“I hope when people come to events like this they think of reuse as a first option, instead of buying new,” said Cara Ferrentino ’08, who has a degree in environmental science and public policy and oversees HLS sustainability programs. “It’s one part of a change in mindsets we’re trying to make in general.”

Monday’s 11 a.m. to 2 p.m. swap peaked early and surpassed expectations. “It took off,” said Sklodowska. “People were so strongly into it.” Those dropping things off, starting at 9 a.m., ended up taking things away early. By noon, the long arrays of tables were nearly picked clean.

If you rushed, you could still get a book on nematode anatomy, a French grammar review, or a tattered guide to bridge tournaments. (But even the pile of books remaining made an opening for conversation. One began, “Bertrand Russell said …” an opening that occasioned a general retreat to the office supplies table.)

One undergraduate wheeled her bicycle along the aisles. “I should have come earlier,” she said, picking through a box of handsome note cards donated by Lamont Library. “All I wanted was a dish rack.”

The dish racks were gone, though — along with a list of goods that an OFS intern had earlier catalogued: nearly 400 books, 25 pairs of women’s shoes, four scanners, nine 500-piece boxes of envelopes, two coffee makers, one hand-sewn quilt, and one baby walker.

The list included 20 vintage VHS tapes. Kate Zirpolo-Flynn, an SEAS staffer who won a Green Carpet award earlier this year, slipped one of the few left into her bag. It was “Mrs. Parker and the Vicious Circle,” a 1994 film about wit and writer Dorothy Parker. “It’s my husband’s favorite movie,” she said.

Sklodowska, who is pregnant and due in October, picked up a few baby toys. “They will come in handy a few months from now.”

Ferrentino was determined to leave empty-handed. With a touch of pride, she said, “I brought things.”