Where art and advertising collide 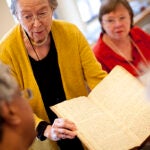 Exhibit explores how photos came to dominate advertising in 1930s

In one arresting image, a woman in a floor-length, lace dress poses on the arm of a chair. With its dramatic composition and use of light, the 1930s-era black and white photograph doubles as both a stunning artwork and an effective promotion for one of the country’s early advertising agencies, N.W. Ayer.

The print is one of many in a new exhibition at Harvard Business School (HBS) that explores the intersection of art, culture, history, and clever manipulation.

Culled from a collection of original prints in the School’s permanent collection, the show, “The High Art of Photographic Advertising: The 1934 National Alliance of Art and Industry Exhibition,” on view at the HBS Baker Library | Bloomberg Center, looks at the interplay between photography as highly successful marketing and as fine art.

The show’s roots date to 1934 when the National Alliance of Art and Industry and the Photographic Illustrators Inc. sponsored an exhibition of 250 works by the leading photographers of the day. Displayed in the gallery of New York City’s 30 Rockefeller Plaza, the 1934 show focused largely on advertising and industrial images. The following year HBS obtained more than 100 of the works for its collection to aid in teaching and study.

While legendary photographer Alfred Steiglitz sought to advance his craft as art, the subsequent generation of photographers who took part in the 1934 show embraced the chance to bring their talents to a mass market. Employing creative techniques such as the use of shadow, portraiture, oblique angles, composite images, closeups, and negative exposures, the photographers combined their art with a commercial setting.

“It was an era of modernist sensibility in photography and product design, when all kinds of boundaries were being crossed,” said Melissa Banta, program officer for photographs at the Weissman Preservation Center in the Harvard University Library and guest curator of the HBS show, who has worked with and written about Harvard’s photograph collections for many years. “Photographers were interested in exploring how they could apply artistic techniques to their commercial work, and they did it very successfully and in highly inventive ways,” Banta added of the works in the show by artists such as Margaret Bourke-White.

By the early 1920s the photograph had begun to replace the hand-illustrated drawing as the dominant advertising image in print media. By the ’30s the transformation was complete. It was sparked in large part, said Banta, by the need to differentiate products from a vast array of standardized goods being manufactured and by the photograph’s ability to exert a strong emotional pull on consumers — a fact that businessmen quickly understood.

Photographers worked “to craft a narrative that buying the featured object meant you could achieve a greater level of happiness as well as identify with members of an elite, sophisticated class,” said Banta.

Many of the exhibition’s works capture that emotive appeal. In one of the show’s eight display cases, a vivid ad for Lady Esther Face Powder catches the viewer’s attention with the use of a novel before-and-after approach. On the left side of the frame, half of a woman’s face appears without the miraculous powder. She appears worn and wrinkled, and gazes at the camera with a look of despair. In the right side of the image, her skin is smooth and wrinkle free after an application of the powder, and she is visibly younger and happier.

But the images aren’t confined to ads for fancy creams and cars. Many of them are documentary in nature, created as part of an industrial relations marketing campaign designed to convey a strong cultural message about the force and power of the nation’s burgeoning Machine Age. Some photos depict an assembly line or a gleaming factory, boosting the vision of America as a thriving producer of goods and at the forefront of industry, despite struggling through the Great Depression.

In one image by William M. Rittase, a masked metal worker labors with a blowtorch amid flying sparks and swirling smoke. A striking picture of New York’s George Washington Bridge by Bourke-White conveys the depth of the massive steel expanse from an upper deck vantage point, offering the viewer a dizzying perspective on American innovation.

“There was a sense in the 1930s that advertising could help inspire faith in the economy,” said Banta, “and companies used photography as an effective means to project confidence in both the production and sale of consumer goods.”

The show is on view at Baker Library | Bloomberg Center through Oct. 9. For more information.