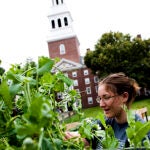 Just call it globalization in cleats.

It’s the national pastime for most of the world, and increasingly soccer is becoming a sport without borders. In recent days, Cambridge taverns have been jammed with fans watching their favorite teams on television.

For the first time, the FIFA World Cup is being held in an African country, as South Africa plays host to the month-long tournament that runs through July 11. The event, which began in 1930 with 13 nations, today includes 32 teams vying for the title of best in the world in a competition long on heartbreak and heart-pounding play.

Over the years, the World Cup’s pool of competitors has expanded to include many African teams that were once considered long shots to claim the championship. While European and South American nations have largely dominated the competition in the past, several African contenders have steadily risen through the ranks. Cameroon’s Indomitable Lions, the Elephants from Côte d’Ivoire, Nigeria’s Super Eagles, and Ghana’s Black Stars regularly qualify and threaten traditional powerhouses such as Brazil and Germany with their competitive, aggressive styles.

What’s behind this rise in play of African teams? According to a Harvard scholar, one answer is globalization.

Many of the world’s top club teams in England, Italy, and Germany recruit heavily from foreign countries now, drawing the best talent away from their domestic clubs with the promise of astronomical salaries and the opportunity to play against the world’s best.

Yet such moves can carry an underlying boon for a player’s national team, since his experience at the game’s highest levels can benefit his own country when he reports for duty on the national team. It’s this experience abroad, said Dani Rodrik, Rafiq Hariri Professor of International Political Economy at Harvard Kennedy School, that strengthens both a player’s own game and that of his national team.

“Some of these teams, like Côte d’Ivoire, have essentially all of their starting 11 playing on European teams, and many of them are actually stars in European leagues,” said Rodrik. “And I think the kind of experience and training that these players get has clearly strengthened the standing of their national teams.”

Of course, such globalization can also carry negative consequences. By depleting African nations of top talent, the competitiveness of domestic leagues tends to suffer. As with labor markets in poor countries that struggle with “brain drain” when top performers seek jobs elsewhere, so too do the soccer teams  that lose leading players to foreign clubs.

“Those who happen to be either talented or luckier tend to reap huge amounts of gain,” said Rodrik of what he called the “common story” of globalization. “In soccer …  my guess is that the domestic league competition in many of these countries has suffered, as the best talent is obviously abroad.”

But globalization of the world’s “beautiful game” can have other positive implications. North Korea, he said, which gave soccer behemoth Brazil a surprisingly tough time in a first-round match, could benefit from participating.

“It shows that even countries that … have insulated themselves so much … are just finding ways of coming back and influencing these economies,” said Rodrik. If North Korea performs “very well, it may reduce some of the mental impediments in engaging the world in a more open way.”

Rodrik admits that World Cup tournaments rarely “really pay for themselves,” because of the massive spending required for new stadiums and transportation infrastructure. But the games still can help to propel a country onto the world stage, providing prime opportunities for advertising and marketing, and leaving behind lasting improvements.

Though he hails from Turkey, Rodrik follows the English Premier League and roots for England. But if Turkey had qualified, rest assured, he would have been blowing his vuvuzela for the Turkish team.