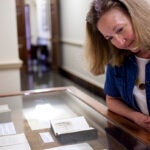 T.S. Eliot, warts and all

Seminar probes historic cookbooks, and what they say about their culinary eras and broader cultures

What can we learn about the Industrial Revolution from a 19th century recipe? What can we discern about culture from a 17th century banquet menu? What can a Reconstruction-era cookbook tell us about architecture? Quite a bit, actually.

Seventeen scholars, academics, and foodies from across the globe gathered in the Schlesinger Library at the Radcliffe Institute for “Reading Historic Cookbooks: A Structured Approach,” a weeklong seminar designed to teach researchers and scholars how to discern valuable data from recipes, menus, and cookbooks.

Led by Barbara Ketcham Wheaton, the honorary curator of the culinary collection at the Schlesinger Library, students spent last week examining British and American texts from three centuries and learning how to approach such texts systematically in order to discern information from various fields of study.

“This kind of analysis is very helpful when trying to get information out of cookbooks,” said William Rubel, a writer and cook who focuses on traditional cooking methods. “This focuses one’s attention on the details, and the devil very often is in the details. The seminar helps us learn how to see between the lines to derive information from what’s implicitly said and also what’s missing.”

During one morning session, a participant talked about a 17th century recipe that called for pushing food through a colander using an apple. A fellow scholar asked whether the recipe intended the cook to use a piece of fruit or a round object that might have been dubbed “an apple.” As debate ensued and doubt was expressed, a smile broke on Wheaton’s face.

“I told you when we started that we would know less at the end of the week than we did at the beginning,” she said.

Wheaton, a renowned culinary scholar, got the idea for the seminar while researching her book, “Savoring the Past: The French Kitchen and Table from 1300 to 1789,” which entailed reading cookbooks spanning that period.

“I had to figure out for myself how to read them,” she said. “You cannot read three cookbooks and see how they’re different. You need to be systematic.”

Wheaton distributed several cookbook readings for the week that span various centuries in Britain and America. At first, students are asked simply to look at the obvious: what is being cooked. By the end of the week, she challenges them to examine the language, ingredients, and tools used to discern how these books fit into the lives of people in their time and place.

“The Closet of Sir Kenelme Digby,” written in 1669, gives hints of the introduction of science to the kitchen. A book from 1825 reveals the beginnings of temperance sentiments that would lead to Prohibition nearly a century later. And in a nod to industrialization, a “Mrs. Putnam’s” cookbook from the mid-19th century references brand-name, machine-made kettles and griddles.

Wheaton began offering her seminar in the early ’90s, and has held it in Los Angeles, New York, and Toronto. This was the second time she has taught it at Radcliffe. In recent years, Wheaton said she has seen a proliferation of academics attending, as the field of culinary history has grown and scholars in other areas realize the value of cookbooks as a primary source for research.

“Food is one of the basic life things that humans have used to make an identity for themselves,” she said. “Yes, we need it. But we have used it also to create a system of beliefs, nationality, and culture.”

The course has long attracted “an interesting variety of people.” In addition to several scholars and authors, a number of food and book enthusiasts were present: Nach Waxman, who owns the noted culinary bookshop Kitchen Arts & Letters in New York; Suzi Sheffield, a restaurant owner from Columbia, S.C.; and Kathleen Wall, the colonial foodways culinarian at Plimoth Plantation.

As participants discussed their readings, expertise emerged. One knew all about the virtues of glass butter churns over wooden ones (the wooden ones rot easily and can make butter spoil), while another chimed in on regional barbecue techniques, and another explained how pressure cookers changed the socioeconomic status of families in India by freeing women from the kitchen and allowing them to work.

“You’re getting a bunch of like-minded people together in one space,” said Regina Sexton, an author who teaches at University College Cork in Ireland. “That’s invaluable in its own right.”

A special treat for participants was when Wheaton brought out treasures from the Schlesinger Library vault. Home to 15,000 culinary works, the Schlesinger’s culinary collection is one of the largest and oldest of its type, attracting academics and researchers from around the world. Begun as a collection intended to document the domestic focus and contributions of women, it has expanded to become an international collection covering culinary history, the cooking professions, gastronomy, the history of domestic life and management, and the role of food in history and culture.

Cookbooks, Wheaton explained, are somewhat harder to collect than other kinds of antiquarian works. Because they’re intended for frequent use, they’re kept in kitchens, not libraries, and are often soiled, written in, stained, and generally battered.

“Here, we have a genuine, authentic 19th century splotch,” she told her class as she walked around with a tattered volume.

Students exclaimed over a handwritten cookbook put together by a group of British women (as a precursor to the Junior League and church cookbooks that would become popular in the following centuries) and took photographs as Wheaton walked around with obscure volumes by the likes of Gervase Markham, Miss Leslie, and Richard Bradley.

Back when she picked up her first old cookbook in the ’60s, Wheaton remembers being the only person she knew who was interested in such things.

“Fifty years later, I’m still reading, still trying to make sense of them,” she said, as her cohorts chatted around her. “But I’m not alone anymore.”