When the past is present 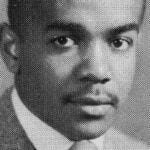 “Language is identity, language is history, language is culture, language is education, and language is a bridge between the past, present, and future,” said Marcus Briggs-Cloud, a graduating master’s student at Harvard Divinity School, addressing a recent meeting of the United Nations Permanent Forum on Indigenous Issues.

Whenever he introduces himself, Briggs-Cloud does so in Maskoke, a melodic language now spoken by only a few thousand people.

Language has been a key to the Florida native’s understanding of his cultural identity and of his ancestors’ fractured history. Using his master of theological studies degree, Briggs-Cloud hopes to preserve his native language, and build a bridge of knowledge and support for the Maskoke Nation.

For his undergraduate education, the son of the Wind Clan people and grandson of the Bird Clan people chose the University of Oklahoma, partly because of its indigenous studies program, but also to explore the genealogical and cultural connections to the descendants of his ancestors who had been displaced by the Indian Removal Act of 1830.

“I wanted to see if the language and the ceremonial continuity was there from what was familiar to me, what we had maintained in Florida, even though we had been separated for 170 years.”

Briggs-Cloud described a moving meeting with relatives of his great-great-grandfather, George Cloud.

“It was an evocative encounter for me,” he recalled, “especially since my great-aunt, who just died at the age of 96, always wondered, with immense emotional pain, if her people ever made it westward on that long road of suffering.”

In Oklahoma, Briggs-Cloud also found something else, a young urban Indian population sadly out of touch with its heritage. “They don’t know where they come from,” he said. “None of them are speakers of their language, and they are mostly disconnected from their communities.”

According to Briggs-Cloud, the disconnect is largely a product of the federal government’s effort during the 19th and 20th centuries to remove Native American Indian children from their homes and educate them in Christian boarding schools.

By the time the practice finally ended in the 1970s, he said, generations of indigenous peoples had been affected, with many suffering from “post-traumatic stress.” Parents no longer wanted to speak their native language or teach it to their children for fear of social repercussions. The critical sense of community that a language helps to foster, said Briggs-Cloud, frequently dissolved in a haze of alcoholism, drug abuse, domestic violence, and even suicide.

He stayed at the University of Oklahoma after graduation, teaching Maskoke language and philosophy in the university’s anthropology department, counseling high school Indian youth, and working with organizations that support indigenous communities. His hope was to mobilize grassroots projects around community engagement – but there were obstacles.

“The irony is that my own people would listen to an anthropologist from Harvard before they would listen to our own elders,” said Briggs-Cloud, a slender young man who wears his dark hair in a long braid and a turquoise earring in each ear to represent balance. “The only thing for me to do was to get that credential. So I applied to only one school.”

Harvard Divinity School allowed him to “really do what I wanted to do,” he said: “liberation theology, decolonization, gender theory — those kinds of areas that I am interested in.”

Building on his Harvard work, Briggs-Cloud developed a curriculum for the course he plans to teach back in Oklahoma at the College of the Muscogee Nation. It involves a critical analysis of theories on decolonization, gender, politics, and epistemology, as well as the theology and philosophy of the Maskoke people. Instrumental to the course will be studying language.

“The decolonization of the mind for indigenous peoples begins with language acquisition,” said Briggs-Cloud. “All of our worldviews are encompassed in our respective languages.”

While at Harvard, he took part in forums in the Harvard University Native American Program, and helped to organize its annual powwow. He was also closely involved with the Harvard Indian Intertribal Dance Troupe.

A self-taught musician, Briggs-Cloud plays the piano, violin, and hand drum, and is an accomplished singer with an album “Pum Vculvke Vrakkuecetv” (“To Honor Our Elders”) to his credit. After graduation, he hopes to pursue a Ph.D. closer to home in Oklahoma, where he now resides. Life on the East Coast has taken him too far away from his community and his tribal duties, he said, which include leading ceremonial dances and songs.

“My ceremonial ground is there,” said Briggs-Cloud. “That’s where my priorities are.”