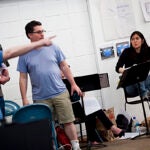 An explosion of creativity

Top faculty discuss their favorite books, and why they like them

A survey of top Harvard faculty shows what books they’re reading and enjoying on summer’s edge.

“The Siege of Krishnapur” “I am a huge fan of historical fiction. In ‘The Siege of Krishnapur,’ J.G. Farrell, an Irish writer who had a rather short life, crafted a stylish novel echoing (well, mocking) the British colonial novel style. It’s written from the perspective of colonists living in a remote outpost (a fictional town in India). It pokes incredible fun at the British, and it was one of the first books to send up the absurdity of colonial arrogance. Farrell goes into great detail in describing the native personalities and invites the reader to watch as a once prim Victorian outpost devolves into chaos during a siege. Incredibly funny, with good character building.”

New Crobuzon trilogy “My daughter and I have swapped our way through China Mieville’s New Crobuzon trilogy (‘Perdido Street Station,’ ‘The Scar,’ and ‘Iron Council’) of science fiction / fantasy books (and I just finished ‘Iron Council’). The sheer inventiveness of Mieville is astounding, from all different civilizations and cultures to the mosquito-like creatures and the entire cast of ‘remades’ (mixed up mechanical and biological life forms). His writing has a definite atmosphere about it. I found the idea of an entirely movable, floating city of interconnected ships in ‘The Scar’ (called the Armada) to be very cool. While the ending of the series is incredibly frustrating, the sheer breadth, amazing wordplay, atmosphere, and energy make the ride worthwhile. And don’t worry … our bioengineers will not be doing this type of thing!”

“The Logic of Failure: Recognizing and Avoiding Error in Complex Situations” “ ‘The Logic of Failure: Recognizing and Avoiding Error in Complex Situations’ by Dietrich Dörner is a management book that has relevance to engineering design. A German psychologist with an interest in early game theory, Dörner basically asked why some leaders fail. By using a ‘paper’ version of SimCity, he concluded that what leads to failure is when a leader asks a whole lot of questions, but never makes any decisions, or when a leader has a preconceived notion of what is right and does it regardless of what anyone else says. I’ve taken Dörner’s insights to heart with my own strategic planning for SEAS. To be successful, you need to ask a few questions, pick a track, and then monitor how things are going (getting feedback as you go). You also have to be very clear about how you define success.”

Jesse Climenko Professor of Law, and director of the Charles Hamilton Houston Institute for Race and Justice

“Known to Evil” “Walter Mosley has written many mysteries, and I have probably read them all. In ‘Known to Evil,’ he introduces us to Leonid McGill, a new character in New York City who’s trying to track down a mysterious woman.”

Mallinckrodt Professor of Physics and of Applied Physics

“The Selfish Gene” “Richard Dawkins’ ‘The Selfish Gene’ is one of these rare gems of a book that leaves you with a different perspective of the world after you’ve read it. Dawkins presents a convincing case for his claim that all species of life seem optimized for one purpose: survival of their DNA. Many of the statements in the book at first encounter seem ludicrous, but Dawkins then goes on to present a wonderfully surprising and convincing argument for his point.”

“Odysseus in America: Combat Trauma and the Trials of Homecoming” “Jonathan Shay’s study of Homer’s ‘Odyssey’ is inspiring me to think about all the ways the ancient Greek texts can speak to the experiences of active-duty soldiers, veterans, military families, and civilians today.  As I plan the A.R.T.’s Greek festival for the 2010-11 season, I am programming productions, readings, and panel discussions that will give audiences many opportunities to participate in civic dialogues about the challenges our nation and world are facing.”

Dean of the Graduate School of Design; Alexander and Victoria Wiley Professor of Design

“The Indian Bride” “I usually have numerous writing deadlines, and so my reading tends to be very instrumental, focused on what I am going to write. But, like most people, I also read to switch off — to get away from the stress of deadlines. Detective stories seem to do the trick best. I recently read ‘The Indian Bride,’ an Inspector Sejer mystery by the Norwegian writer Karin Fossum. It takes place in an isolated village where a quiet agricultural machinery salesman decides to travel to Mumbai to bring back an Indian bride — hence the title. Fossum’s subtle description of the Norwegian landscape, the humility of the main character, and the guardedness of the members of the community against all outsiders are chillingly revealing.”

“Ill Fares the Land” “Like many people, I’ve been riveted by the incredible short pieces in the ‘New York Review of Books’ by the British historian Tony Judt, who is paralyzed from the neck down with Lou Gehrig’s disease; he is able to speak but not write. Judt has an astonishing capacity to construct such concise sentences, actually whole articles, in his head. He has just published ‘Ill Fares the Land,’ a book based on the NYR articles. Judt’s reminiscences deal a lot with his life in England, and having spent a large part of my life there too, I am very sensitive — almost nostalgic — about many of his period pieces, such as the ghastly description of the hovercraft, which I remember taking to a cold and remote school on the Isle of Wight as a boy in the 1960s.”

“The Country Formerly Known as Great Britain” “Maybe to get over the sense of nostalgia, or just to extend it, I am now reading ‘The Country Formerly Known as Great Britain’ by Ian Jack. Jack, who now writes for the Guardian newspaper, used to edit the literary magazine Granta. There are certain parallels between these last two books in their consideration of a time gone by, of a Britain that now exists only in memory. Jack’s writing is always such a pleasure to read.”

“Churchill” “In times like these, my reading often turns to leaders of the past who have led democracies out of peril. Of late, I have been tackling a brace of new books about Churchill, and enjoying them all. Paul Johnson’s biography, ‘Churchill,’ is the best of the lot: insightful, concise, and graphic — enough so that I have sent it to friends.”

“The Big Short: Inside the Doomsday Machine” “Meanwhile, I’ve been struggling with a stack of books about the roots of our economic turmoil. Michael Lewis has once again weighed in with one of the most readable, ‘The Big Short: Inside the Doomsday Machine’; Andrew Ross Sorkin’s ‘Too Big To Fail’ looks like a must — and yet is forbiddingly long. I have found refuge in thinking more about where we go from here. Even if a bit repetitive, I found some provocative answers in Richard Florida’s new work, ‘The Great Reset.’”

“Still Surprised: A Memoir of a Life in Leadership” and “Susan” “But the most satisfying books of the season are by dear friends. Warren Bennis has just completed his memoir, ‘Still Surprised: A Memoir of a Life in Leadership.’ And when it appears in print soon, readers will find it a delightful intellectual romp through the flowering of social science … after World War II, as well as a meditation on leadership. The other is a soulful work, beautifully written and inspiring, by Susan Tifft. She waged a noble struggle against cancer, captivating legions of friends old and new with her blog entries on CaringBridge.org. At her services at Memorial Church, her husband Alex Jones gave a bound copy to each of those who filled the pews. It is titled simply, ‘Susan’ and, like her, is a treasure.”