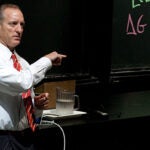 The prestigious doctoral award offers each Trudeau Scholar up to $180,000 to advance his or her research into critical issues such as labor, mental health, conflict resolution, and the environment, by subsidizing tuition fees and living expenses and allowing recipients to travel for research and scholarly networking and knowledge dissemination. The scholarships are among the most coveted awards of their kind in Canada.

A native of Fernie, British Columbia, Kelly will focus her doctoral research on the legal regulation of children and adolescents at home, at school, and in detention.

In addition to receiving financial support, Trudeau Scholars benefit from the expertise and knowledge of Trudeau fellows and mentors, highly accomplished individuals in the Trudeau Foundation community who are leaders in both academic and nonacademic settings. Interaction with nonacademic milieus, including public policy networks and the public at large, is a key component of the Trudeau Scholarship program.

For more information about Kelly and her research, visit the Trudeau Foundation Web site.