Science for the young set 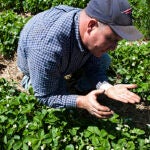 The chorus of “ewwws” and “gross” weren’t the reactions usually heard coming from a college classroom. But these were the comments emanating from Harvard’s Maxwell Dworkin Room G115, as 22 fourth- and fifth-graders from the Elihu Greenwood School in Boston’s Hyde Park neighborhood tugged at the stringy, slimy mess in their cups.

The young scientists had just produced strings of alginate, a food thickener that is an extract of seaweed, by adding an alginate solution to water containing calcium. The experiment yielded long squishy strings that showed how polymers can be cross-linked together to form gels and other useful materials.

“This is awesome,” said Taejah Baker, holding up her blue strings. “I’m going to take this home and scare my brother.” Her lab partner, Kiara Vazquez, had another idea. “I’m going to scare my mom,” she said.

The experiment, guided by Kathryn Hollar, director of educational programs at the Harvard’s School of Engineering and Applied Sciences (SEAS), was one of dozens of science experiences that gave 200 Boston children a chance to roll up their sleeves and “do” science on five Boston-area university campuses during Step UP’s Science Across the City Day on May 3. Harvard, Boston College, Boston University, Northeastern, and Tufts are working with the Boston Public Schools and the city of Boston year-round to help boost student achievement at 10 schools linked to the Step UP program.

Step UP is a collaboration among the universities and the Boston schools. Harvard is a founding member of Step UP and has been offering after-school program support, learning materials, and professional development at the schools for three years.

For the Greenwood students and the 25 more from the Agassiz Elementary School in Jamaica Plain, the Harvard activity was more than a crash course in polymers. It was a first foray into the world of chemistry.

“These children were able to be scientists for a day — guessing, experimenting, drawing conclusions in a setting they don’t have in their schools,” said Emily Barr, program coordinator for the Harvard Achievement Support Initiative that supports after-school learning in Step UP schools. “It’s a small example of what we’re doing through Step UP, providing resources and expertise to local schools to support teaching and learning.”

Later in the day, the budding scientists explored geology at Harvard’s Museum of Natural History, where they pursued clues in fossils, limestone, granite, even mammoth hairs, to sample the geological history of New England’s landscape over 600 million years.

“Many of our students were inspired to be at Harvard,” said Kate King, science specialist at the Agassiz School. “I overheard comments about wanting to go to college, especially at Harvard, wanting to be a scientist, and just appreciating the whole setting and learning environment.”

Janet C. Lynch, a Greenwood teacher, said, “This was a great opportunity for our students to experience a higher level of scientific thinking. They have not stopped talking about the great time they had and want to know when they can return.”