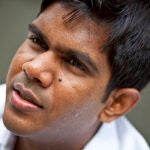 There’s ice-skating, and there’s poetry. And then there’s ice-skating poetry written by a former professional athlete who is a pre-med English concentrator. Loren Galler Rabinowitz is all of the above and — if you can believe it — more.

Galler Rabinowitz, who grew up in Brookline, Mass., and Barbados, already has lived a full life. From the ages of 2 to 20, her home was on the ice, where she eventually traveled around the world competing professionally with her skating partner David Mitchell, garnering acclaim as U.S. Junior Champions and 2004 bronze medalists at the U.S. Figure Skating Championships. But, she said, she always knew she’d eventually land at Harvard.

“I think one of the most important things for me as a professional athlete was that I always took school very seriously,” said Galler Rabinowitz, who attended high school full time, even after training for four hours each morning. She deferred enrollment at Harvard to compete professionally for two more years after graduation, taking up residence at Adams House in 2007.

“One of the things that I knew I was going to miss when I stopped skating was the constant creative outlet,” said Galler Rabinowitz, “so I signed up for a creative writing course as a freshman.”

She eventually was chosen as a thesis advisee by Pulitzer Prize-winning poet Jorie Graham, the Boylston Professor of Rhetoric and Oratory, from nearly 100 creative-writing thesis applications.

Her 70-plus-page manuscript, “The Invisible Encyclopedia of Dance,” recalls the tenuous stake on which glory rests, and evokes dance moves using the skater’s trademark measured precision — only on the poetic line. In “Ice Dancer,” Galler Rabinowitz writes: “The position must be maintained. / There is only up or down. / There are only laurels or sorrow.”

The poems also delve into headier matter, such as sickness and death. In the fall of 2008, Galler Rabinowitz began shadowing a pastor at Mount Auburn Hospital. Her grandmother, a Holocaust survivor and 50-year New Orleans resident, had died in the aftermath of Hurricane Katrina. “I was very interested in how people deal with loss,” recalled Galler Rabinowitz.

“One of the things that most draws me to becoming a doctor is a sense of compassion and being a humanitarian,” she said. “That’s missing from medical education now. It’s sort of technical and diagnostic. I want to make the experience of going to the doctor’s office enjoyable and not terrifying.”

Now Galler Rabinowitz is considering medical schools and eventually wants to enter pediatrics. Medicine wasn’t always a career goal, but her parents are also physicians, and, she said, “They’re so passionate that it’s infectious.”

But medicine might wait a few years, too. Galler Rabinowitz is eyeing some of Boston’s M.F.A. programs in creative writing and may divert elsewhere, at least for a little while.

But this juggling is nothing new. Even at Harvard, Galler Rabinowitz coached youth ice skaters, waking every morning at 5:30 to meet them on the ice. That quickly led to her tutoring them and advising with SATs and college prep.

“One of the things that’s so interesting is how much of my skate training — discipline, work ethic, attention to detail, creativity — has been applicable to my activities at Harvard. I really like being able to show my young students the ways they can apply what they learn on the ice to all sorts of things they’re doing,” she said. “I think a lot of my successes at Harvard were due to that very specific training.”

Galler Rabinowitz is also adamant about giving back. Every Christmas she runs a charity event at the Charles Hotel in Cambridge, raising money for Globe Santa and even teaching a few skating lessons. “I get to do good things and wear a sparkly dress,” she said. “What could be better?”

Though her classmates often looked her up on Wikipedia, there’s no sign any of her well-chronicled achievements have gone to her head.

“I’ve had the privilege of competing at the highest athletic level and attending Harvard,” Galler Rabinowitz said. “And I didn’t really anticipate being able to merge my love of writing and being a future physician, but it really worked out that way.”