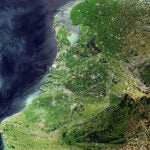 Neanderthals contributed 1 to 4% of our DNA outside Africa

A preliminary draft of the genome of the Neanderthal, our closest evolutionary relative, reveals in exquisite detail how this long-extinct member of the Homo genus relates to modern humans.

The work for the project was carried out in two phases. In the first phase, scientists at the Max Planck Institute in Leipzig, Germany extracted a genome’s worth of DNA from bones
approximately 40,000 years old, taken from a cave in Croatia. In the second phase, an international consortium analyzed the data to study how Neanderthals are related genetically to modern humans. A key analysis — led by Harvard Medical School (HMS) associate professor of genetics David Reich — revealed that Neanderthals interbred with ancestors of modern Europeans and Asians, but not Africans.

“Europeans and East Asians today bear a closer relationship to Neanderthals than do Africans,” says Reich. “One to four percent of the genomes of non-Africans trace their ancestry to Neanderthals. Europeans and Asians both have this signal, indicating that the gene flow occurred at least 45,000 years ago, before these two populations’ ancestors separated.”

These findings are published in the May 6 issue of Science.

Neanderthals, who became extinct roughly 30,000 years ago for unknown reasons, and who diverged from modern human ancestors 270,000-440,000 years ago, have long been a subject of intense speculation. They are the closest population in the fossil record to anatomically modern humans, yet they are clearly distinct in terms of their physical structure.

Neanderthals had bigger faces than we do, with more barrel-shaped chests and shorter limbs, and were most likely better adapted to colder climates. Their brains, despite being a bit longer with possibly smaller temporal lobes, were generally the same size as ours.

The fossil record shows that modern humans and Neanderthals overlapped geographically for tens of thousands of years in Europe and Asia. From this evidence springs the obvious question: Did the two species intermingle and pool their genes?

For more than a decade, a group of researchers led by Svante Pääbo at the Max Planck Institute has been attempting to obtain sequences from the Neanderthal genome using pill-sized samples of powder extracted from bone fragments. This type of work is often thwarted by sample contamination (the majority of DNA extracted in such experiments turns out to come from microbes, or from a hapless laboratory technician). However, the researchers increased the purity of their samples by taking advantage of technological advances that could both detect and filter out contamination of the genetic material.

The result was a reconstruction of more than 4 billion base pairs of DNA assembled from a variety of cells. This total represents roughly 60 percent of the Neanderthal genome.

An international team of geneticists led by David Reich then studied how Neanderthals and modern humans are related by comparing this new genomic data to five present-day humans from far-flung regions of the world. Reich and his colleagues discovered that roughly one to four percent of the genomes of all non-African modern humans are directly descended from the Neanderthal. What’s more, these modern groups all appear equally related to their “distant” cousins.

One explanation for this uniform genetic distribution is that interbreeding occurred at the gateway of the migration of modern humans out of Africa in the upper Paleolithic period, roughly 45,000 years ago. From points in Northern Africa—that is, modern-day countries such as Libya and Egypt—modern humans dispersed throughout Europe and East Asia.

“That’s not the only explanation, but it’s the most likely one,” says Reich.

As far as the researchers can tell, this small percentage of inherited DNA is random. There is no evidence that it is associated with specific traits.

According to Harvard University professor of human evolutionary biology Daniel Lieberman, who was not involved with the study, we shouldn’t be terribly surprised at this evidence of interbreeding. “I do not think this in any way lessens the evidence that Neanderthals and modern humans were indeed separate species. Closely related species often do interbreed to a limited extent.”

Clearly, the data is a treasure trove for future study. “There is a tremendous amount of yet untapped information in this genome,” says Reich, “and we’re going to be
spending many more decades getting closer to what it all means.”