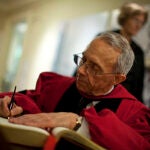 Harvard confers degrees on its departing Class of 2010

It is the jewel of Harvard’s weeklong Commencement celebration, the morning on which the Yard is crowded with graduates old and new, and in which pomp and play and pride seek full measure.

“That’s the idea, that nothing changes,” said Victor Ford ’53 of the Commencement pageantry today (May 27). Ford, pastor emeritus at First Church in nearby Charlestown, where College benefactor John Harvard worshiped, stood with his cane near Johnston Gate.

“You have not survived four years here simply to be lost in the universe,” Gomes told the seniors, some of them sitting up on the altar and some spilling into the aisles. “Something of the greatness and the goodness that is in each of you will survive, and in certain cases even prevail.”

He cautioned the students against striving for the kind of greatness that is too often tied to a drive simply to achieve. Instead, Gomes urged the graduating class to aim, above all, for goodness.

Gomes acknowledged that some listeners may perform great deeds, such as finding a cure for cancer or a “sensible way of explaining the economy,” and that he would be grateful for their successes. But he suggested that most of the graduates would simply be “called upon to do small and ordinary things as well as possible.”

Gomes added, “If you do that well, you will have remade our world and your little corner of it, you will have justified our high hopes in you, and you will have given substance to the ancient vision for a new heaven and a new Earth.”

“Know that the world will be a better place,” he said, “for your honest participation in it.”

Gomes’ message resonated with Laurel Macey of Winthrop House, a human evolutionary biology concentrator who will work in a research lab at the Harvard School of Public Health in the fall.

“I liked that he reminded us that we should not strive for greatness, we should just strive for goodness, and then great things will follow,” she said. “That’s an important message for Harvard students … that sometimes it is more important to just be good.”

Excitement rose in the Old Yard as seniors, alumni, faculty, and staff gathered to form their long procession lines. The parade, an annual ritual replete with bright, multicolored academic gowns and hoods, processes through the Yard and into Tercentenary Theatre, the outdoor area between the Memorial Church and Widener Library, which was first used in 1936 as a ceremonial gathering point to celebrate the College’s 300th anniversary.

Fred Abernathy, Gordon McKay Professor of Mechanical Engineering and Abbott and James Lawrence Research Professor of Engineering, stood atop his traditional small podium near Johnston Gate and organized the procession. He called out facts and figures from years gone by to correspond with a particular alumni class, as well as humorous quips.

“Slowly for the honorands. Don’t march too fast; it is not a race,” said Abernathy of the group of speedy honorary degree recipients hurrying by, which included actress Meryl Streep. She wore tinted glasses and a pair of impressively high wedge shoes.

Inside the Yard, Sheriff of Middlesex County James V. DiPaola opened the Morning Exercises with three sharp raps of his silver-tipped staff. His call was loud, resonant, and stentorian: “This meeting will be in order.”

The words are one of the traditions during Commencement Week’s biggest day. But a few things do change — the degree recipients, for one, all 7,125 of them this year, on the 359th Commencement. The recipients of honorary degrees change too. There were 10 this year, from retired U.S. Supreme Court Associate Justice David H. Souter ’61, LL.B. ’66, to education innovator Freeman A. Hrabowski III and iconic actress Meryl Streep.

But even the honorands can’t escape at least one short-term Harvard tradition: the tight, bright, punning descriptions of them by President Drew Faust. “A formidable man of steel,” she called sculptor-in-metal Richard Serra, “he has knocked sculpture off its pedestal.”

Harvard Provost Steven Hyman brought his own game to Faust’s wordplay. “Merrily we honor,” he said in an introduction, “Meryl Streep.” The Academy Award-winning actress, who sat on stage next to Souter, stood and blew a kiss to the audience when her degree was conferred. Though it wasn’t her hardest role (Streep has been nominated 16 times for the Oscar, winning two), it was the performance everyone had been waiting for. The crowd went wild.

There were also wild crowds, School by School, as degrees were conferred on the graduates. The newest grads of Harvard Law School waved wooden gavels. Kennedy School grads threw inflatable globes into the air, and those of the Graduate School of Education waved books.

For more serious traditions, there are the three orations by graduates.

The Latin Salutatory by Mary Anne Marks ’10 included a phrase that most observers recognized, “multum laboris,” or, “a great deal of work.” That’s university life, in any language.

Chiamaka Lilian Nwakeze ’10 delivered the Senior English Address, “Poetry for Chemists,” an argument that a liberal arts education deepens understanding of the sciences. It is “a scaffold on which individuals are formed,” she said, a broad education that bestows “an interconnected consciousness … for a total picture of reality.”

Comedian James “Jimmy” Tingle, who received a master’s degree in public administration from the Kennedy School, rocked the house with the Graduate English Address, even while confessing he spent his boyhood thinking of Harvard as simply “a good place to steal bicycles.”

Tingle started as a street performer in Harvard Square. “I don’t want to brag, but two years ago I performed in Europe,” he said, and then paused. “And I have to say: excellent country.”

Tingle also described his temporary academic stumbling block, a required course in statistics. If he can pass statistics at Harvard, he said, then one other thing is certainly possible: “world peace.”