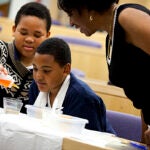 Science for the young set

On May 27, thousands of students are graduating from Harvard. Each has a successful past to relate, and a promising future to embrace. In a series of profiles, Gazette writers showcase some of these stellar graduates.

As a young computer whiz, Lahiru Jayatilaka learned a lasting lesson about the importance of precision.

His father agreed to let him build a computer for their home, so the eager teen confidently studied “how to” tips, then set about connecting the intricate, costly hardware. In the final step, he quickly inserted a small component into the system’s main control panel. Triumphantly, Jayatilaka pressed the start button, and then watched the “blue screen of death” appear.

Everything seemed to be in order, but when he re-examined the final piece, Jayatilaka noticed an arrow and three little words: This side up. “The most important part of the machine had been inserted the wrong way,” and every part had to be bought again, he recalled. “I’ll never forget that.”

Jayatilaka brought that lesson with him to Harvard. As an undergraduate computer science concentrator, the Currier House resident helped to build robotic devices for detecting land mines. It was work in which precision was everything. “I have learned that going slow, taking time, following instructions, and taking a step back are very important,” he said.

Jayatilaka grew up in Sri Lanka, the son of an engineer and a lawyer, and was largely sheltered from the civil war raging between the government and the separatist Tamil Tigers. But at Harvard, he began to understand the repercussions of the conflict, which ended last year, and in particular the brutal legacy of land mines.

After a chance encounter at dinner, Jayatilaka spent two years collaborating with Thrishantha Nanayakkara, a one-time Radcliffe Fellow and member of the Scholars at Risk program, administered by the Harvard University Committee on Human Rights Studies, on a robot that would detect land mines. The process deepened his understanding of the explosive devices, which carry sweeping social costs.

“Children can’t play or roam freely, farmers can’t farm their land and don’t have ways to feed their family, the government can’t support the number of people suffering from injuries and disabilities,” he said of the “frozen societies” that mines create, “not to mention the thousands of refugees displaced from their lands.”

The work on robots was exciting. But its prohibitive costs, and the challenges of using the technology in such rugged terrain and difficult weather, meant its immediate applications were limited. Wanting to address the problem in the near term, Jayatilaka wrote his senior thesis on patterns of land mine detection.

His research has produced a visual interface that may enable workers searching for mines to determine the type and location of buried objects with significantly more precision than is possible with currently available equipment.

He hopes to continue his work with Harvard’s School of Engineering and Applied Sciences next year, to test his prototype mine detector in the field, and to start a Ph.D. in computer science at Harvard.

“I have strong opinions about where the country needs to go,” said Jayatilaka, who is interested in politics. “There need to be certain fundamental changes in the way we approach electing our leaders, and the way our leaders approach leading our country.”

The irony is, he never planned to come to Harvard. His mother submitted the application for him.

“I didn’t think it was the right fit,” said Jayatilaka, who assumed his mechanical background would be better suited for a certain engineering school farther down Massachusetts Avenue.

But today, Jayatilaka wouldn’t change a thing, acknowledging that Harvard’s broad exposure to the liberal arts has led to “one of the most formative experiences of my life.”

He used his time to pursue his passion for computers, but also to dive into courses in government, politics, and economics. That helped him to understand the conflict and unrest in his own country, said Jayatilaka. He also relished exploring history, literature, and philosophy.

He credits the experience with reshaping the way he channeled his skills as an engineer. “It has pushed me to be more practical and hands-on in addressing an issue,” said Jayatilaka, “rather than being in love with the abstract and theoretical.”