The man with a Commencement plan 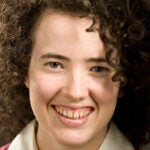 Inside an office where Julia Child used to film her cooking show, Jason Luke is whipping up another kind of dish: Commencement.

It’s a historic backdrop like Child’s set that adds extra mystique to Luke’s job as associate director of custodial and support services for University Operations Services. That’s a mouthful, but behind the long title is a Frank Sinatra-loving ultra-preparer. And he has to be. It is spring, after all.

April and May are no ordinary months. Commencement is easily the busiest time at the University, but especially so for Luke. That’s when he — to quote a sticker on a file cabinet in his office — earns the moniker “The Man.”

“When Yardfest [an annual spring concert for undergraduates] gets here in April, I’m like ‘OK, here we go,’ ” said Luke. “Then after that, it gets pretty intense.”

In the off-season, Luke oversees a staff of 250 custodians and handles logistics and support for other Harvard events peppered throughout the academic year. But nothing compares with the end-of-year weekly soirée of Class Day, Morning Exercises, alumni reunions, and the hundreds of other happenings, which he helps coordinate under Commencement Director Grace Scheibner and the Harvard Alumni Association. Then, after months of intense planning, Luke rounds up his crew, a bevy of student workers, and gets cookin’.

There are countless components that make up Commencement, according to Luke, ranging from the small to the massive. Take, for instance, dorm rooms. Those have to be turned around for alumni visitors after vacating students are gone, then turned around again in time for summer school. And think of all the technical equipment that goes into staging a large-scale production — cords and cables and speakers, oh my!

“Commencement is a year-round thing,” said Luke, who also coordinates labor, seating, staging, tenting, setting up, and breaking down. “But at the beginning of May, we start taking the equipment out of storage. We take inventory, we see what’s damaged or missing, then we start working in the Yard.”

But who better to tackle all this than one of Harvard’s own? Luke, a one-time concentrator in English and American literature, graduated in 1994. As a student, he worked for the student dorm crew on facilities maintenance, a precursor to the 15 years he has now worked at Harvard.

Right before Commencement, Luke moves onto campus to better manage his massive workload. “I set up another office in Sever Hall, and then I usually stay in Wigglesworth for 10 days,” he said. “I just don’t go home at all.”

“I pull a couple of all-nighters, at least,” he says. “I probably get about three or four hours of sleep a night for 10 days.”

His assistant stays in the dorm room with him. “We don’t want to oversleep, so we can wake each other up this way. The pace of the week is just so hectic.”

Imagine, for instance, setting up chairs and other infrastructure for about 32,000 Commencement attendees.

“There’s a very, very specific setup for the chairs,” said Luke. “It takes several days. We have specific counts for each section.” He and his staff arrange them meticulously well before Commencement. But because events are already going on, Luke and his team don’t just arrange them once, but several times.

“People are coming into the Yard, moving the chairs, things get changed,” he said. “You’ve got to redo it, recount it, over and over and over.”

When Commencement ends, there are more events on Luke’s horizon. Sustainability is another project he is working on. He has helped to integrate four nontoxic products into everyday cleaning use, including a disinfectant, and he has brought in microfiber cloths in place of throwaway paper towels.

But by July or August he vows to take a well-deserved vacation. He’ll stream a little Sinatra (whose mug bedecks Luke’s office walls), or maybe Nat King Cole and Bobby Darin. He’ll don his trademark Tilley, an indestructible and UVA/UVB ray-blocking hat, and get down to the business of just relaxing. “If people need to find me,” he said, “look for the hat.”