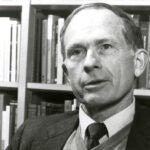 Fredric Woodbridge Wilson, curator of the Harvard Theatre Collection and resident of Watertown, Mass., died on May 15 of pancreatic cancer. He was 62.

In his 13 years at Harvard, Wilson curated more than 40 exhibitions, many of which explored his favorite corner of theatrical history, 19th century British theater, including theatrical caricatures, pantomime, Toy Theater, and Gilbert and Sullivan operas, a subject in which he was widely considered an expert.

Wilson was born in Point Pleasant, N.J., on Sept. 8, 1947. Raised on the Jersey shore, Wilson attended Lehigh University, initially as a physics major, but became the university’s first-ever music major, graduating in 1969. At Lehigh he developed a deep interest in choral music, and from there pursued a graduate degree in musicology at New York University, where he conducted several choirs.

In 1981, Wilson was appointed to the staff of the Pierpont Morgan Library, now the Morgan Library and Museum, after having become a familiar presence there as a researcher in music and opera. At the Morgan Library, Wilson curated several exhibitions — most importantly a show in 1989 on the Gilbert and Sullivan operas that was one of the library’s largest exhibitions ever — before coming to Harvard. A week after taking his new position, Wilson was awarded a fellowship by the Guggenheim Foundation for research in the history of theatrical publishing.

Wilson is the author of many books, including most recently, “The Theatrical World of Angus McBean” (2009). He lectured widely; was an active member of the Society of Printers, the Harvard Musical Association, the Old Cambridge Shakespeare Association, the Signet Society at Harvard, and the Senior Common Room of Lowell House; and was a proprietor of the Boston Athenaeum. At Harvard, he organized major symposia on the choreographer George Balanchine in 2004. His last (and largest) exhibition, which opened in April 2009, was a centenary celebration of Serge Diaghilev’s Ballets Russes.

He is survived by a sister, Elaine Chapman Mazzara, a brother-in-law, Walter Mazzara, and two nieces. Arrangements are private.