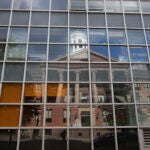 Away from main stage, small moments sparkle with their own light

Harvard’s Commencement Day, May 27, included myriad sights, sounds, and experiences beyond the main stage. Here are some samples.

Members of Autumn River Brass, the five-piece band that serenaded Dunster House with classical music at 6 a.m., didn’t take the complaints of disturbed sleepers to heart. When someone complained from a window about being awakened, the group simply played on. “We didn’t mind; that’s the point,” laughed trumpet player Fred Sienkiewicz. Later, the group escorted seniors into the Old Yard with a selection of Dixieland songs. By 7:30 a.m. the ensemble was done and ready for rest. “We’re musicians,” said trumpet player Yaure Muniz. “We’re headed back to bed.”

For eight years, Joe Fabiano has kept watch at Mather House as a security guard. On Thursday, he kept watch at a gate to Harvard Yard, as he has also done for eight years, and welcomed his flock of students to the Morning Exercises. Moving a white barrier aside, Fabiano smiled and waved as the procession of students and faculty, led by a bagpiper, filed by. Students waved back and offered a happy “Hi, Joe,” to him. Many stopped for hugs. Fabiano encouraged their procession. “Let’s hear it for Mather,” he hollered, along with “Good luck!” He replaced the gate after the last senior was through and remarked softly, “I love these kids.”

Two Radcliffe alumnae dressed in black with top hats and black and red batons warmly directed traffic through the Old Yard, in their duties as official marshals for the day. Pausing briefly to reflect on their own time at Harvard, Vaughan Castellanos Barton and Rosemary Bonanno, both from the Radcliffe Class of 1955, laughed as they recalled some of the changes that have taken place at the Cambridge institution since they graduated 55 years ago. One of the biggest updates: male/female fraternizing. “We weren’t allowed in Lamont Library,” recalled Bonanno, “because it would be too distracting to the young men there.”

Senior Anthony Pino of Leverett House posed for photos and received a bear hug from his aunt next to the statue of John Harvard in front of University Hall. The tall economics concentrator, who intends to work for a venture capital firm before entering Harvard Business School, said he “could not feel more fortunate” about his undergraduate years. At Harvard, he said, “You get lots of new ideas, new ways of thinking about things, and a whole lot of fun, and people that you love, and that’s great.” One “memory” for Pino was jumping off the Weeks Memorial Footbridge. “I may or may not have done that,” said a coy Pino, who may or may not have been wearing just his underwear when he (possibly) took the plunge.

Alasdair Halliday ’82, senior associate director of University Planned Giving — clad in a MacBeth clan dress kilt — was outfitted for his other role at today’s Commencement ceremony: official bagpiper for his Harvard College class. Asked to return for his 25th reunion and provide some songs, he so pleased classmates with his work that they have invited him back every year since. Halliday, a songwriter and jazz pianist who once played bagpipes for Ella Fitzgerald, serenaded his class with tunes such as “Scotland the Brave” and “Amazing Grace.”

For most Harvard Commencements, you’ll find Frederick H. Abernathy perched on a low platform near Johnston Gate, directing traffic made up of the alumni, faculty, honorands, students, and visitors who crowd into Harvard Yard for the traditional Morning Exercises. (He is Gordon McKay Professor of Mechanical Engineering and Abbott and James Lawrence Research Professor of Engineering.) This time, Abernathy kept up a patter of prescriptions. He warned speed-walking honorands, for instance, to slow down. (Meryl Streep, at the head of that line, took direction well.) At one point, Abernathy also gently admonished the reuniting Class of 1985 to get off the sidewalks and out of the way of the forming procession. “When you come to College, you’re told to stay off the lawn,” he said in his trademark radio-pipes voice. “Well, you’re not in College now. Please get on the lawn.”

Lining up in the Academic Procession does not always come with exact directions. At the last minute, a few members of Harvard’s corps of 36 chaplains were looking for a place to go. “Let it be noted,” said Humanist Chaplain Greg Epstein, M.T.S. ’07, author of the bestselling “Good Without God” (2009), “the chaplains don’t know where to stand.”

In the front row

George Barner ’29 had a front-row seat at Commencement’s Afternoon Exercises— and it might as well have been the seat of honor. Barner is the lone survivor of Commencement 81 years ago, and he represented the Harvard class that goes furthest back in time. When Barner arrived on campus, as a transfer student from Grinnell College in Iowa, Charles Lindbergh had recently piloted the Spirit of St. Louis to Paris. In those days, the Harvard House system was still a daydream. “We lived wherever we could live,” said Barner, 101, and a retired lawyer living in Kennebunk, Maine. He bunked in the Sigma Alpha Epsilon fraternity house on Boylston Street, and briefly at a near-empty dorm at the Harvard Business School — an institution then less than 20 years old. Barner’s happiest memories are of theater, especially the annual musicals put on by Pi Eta, a long-vanished competitor to Hasty Pudding. His last production, in the spring of 1929, was “Wrong Again.” Barner wrote the book, and Harold Adamson wrote the lyrics. (Adamson, later a contract songwriter at MGM, wrote the classic “It’s a Wonderful World,” as well as the theme song for TV’s “I Love Lucy.”) As for his alma mater, “Harvard changes every year,” said Barner. “For the better, I think.”

During Commencement morning’s procession, members of the Class of 2010 lined the walkway into Tercentenary Theatre, applauding as University officials and honorary degree candidates marched amid the sea of chairs. The applause grew notably louder as one honorand passed, in a red gown befitting her honorary doctor of arts degree. One student shouted, apparently in surprise, as the film icon passed just inches away: Mer-yl Stre-ep!

Dudley Co-op, right behind you!

And the last shall be first, or rather, the first last. Bringing up the rear of the undergraduate procession in the Yard were students from the Dudley Co-operative Society. Rather than living in the dorms, students in the co-op inhabit houses nearby, sharing household chores, cooking, and cleaning.

Elyssa Jakim, a visual and environmental studies concentrator, said being last in line had its benefits. Though the co-op students would be the last to enter the theater, they were the first to greet University officials and honorary degree recipients.

Another student said the events felt like a circus, because she had never seen so many men in top hats before.

Giving until it … feels good

The Senior Gift co-chairs, Alterrell Mills, Mary Cox, and Diana Robles, had record-breaking news during Class Day ceremonies. The Class of 2010 broke the record for participation in the senior gift, smashing the old mark by 6 percentage points, to 80.2 percent, with Lowell House leading the way, at 93.1 percent.

The next day, during Commencement’s Afternoon Exercises, Harvard Treasurer James Rothenberg hailed other classes that reached their fundraising marks, including the Class of 1975, which set a record for its 35th anniversary, raising $31 million in gifts.

The year that split the century

Esther Walder Klionsky, a member of the Radcliffe Class of 1950, was enjoying her time in the Yard at Commencement’s Afternoon Exercises. Reflecting on her 60th reunion, Klionsky termed it “wonderful, just wonderful,” adding that her class graduated in what people then called “the year that split the century.”

Christopher Holmes, a new Ph.D. in Earth and planetary sciences, said that his future — as with so many graduates — will lead away from Cambridge. Holmes, whose dissertation was on air pollution and the spread of mercury, will head for the University of California, Irvine, on a postdoctoral fellowship in the fall after a summer spent finishing work here.

Holmes enjoyed the day and commented that U.S. Supreme Court Justice David Souter’s speech on constitutional interpretation by judges was a refreshing change from the usual advice-laden address. But the best part of the day, Holmes said, was who he got to spend it with.

“It was fantastic to have family here,” he said.