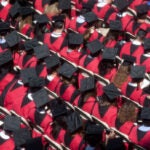 International television correspondent Christiane Amanpour urged Harvard’s graduating class to take a year before plunging into the job market and head overseas to work on the myriad problems facing the world.

“I hope you will take this moment to think about traveling,” Amanpour said. “There is so much opportunity out in the developing part of the world … where I have been for the past 27-odd years. People are waiting for you. They’re waiting for an army of energetic idealists like you to help build small businesses, to run schools, to teach class … It will change your lives, and it will set you on the road to your future.”

Amanpour, who has been a fixture on the front lines of conflicts and disasters overseas for CNN, was the main speaker for this year’s Class Day ceremonies, traditionally organized by the seniors and held the day before Commencement. In her 25-minute speech Wednesday (May 26), Amanpour hearkened back to the Marshall Plan, the massive European aid effort unveiled at Harvard’s 1947 Commencement by Secretary of State George Marshall. Just two years after the end of World War II, he outlined the assistance that was pivotal in helping Europe to rebuild from its rubble. Today, Amanpour said, America’s challenge is similar, involving stabilizing Iraq, Afghanistan, Pakistan, Yemen, and Haiti, all important to America’s peace and security.

“Beyond the armies and treasure of the United States deployed to these places, they need armies of people like you who are graduating today, civilians wielding … high ideals, smart ideas, smartly deployed to really make development work,” Amanpour said.

Amanpour delivered her address in Harvard Yard’s Tercentenary Theatre. Amanpour said she too was graduating, after a fashion, moving on after 27 years at CNN to host ABC’s Sunday morning “This Week” program.

She was one of several speakers to address the seniors during Class Day, which offers a less formal setting than Commencement’s scripted rites and provides a chance for class members and College officials to address those attending.

Harvard College Dean Evelynn Hammonds briefed the students on what was coming Commencement Day, describing the exercises as “full of incantation and free of explanation,” and warning the students that the time will likely pass quickly for them, joking that it may seem especially quick since they probably won’t be paying attention.

Hammonds said the students will be sent into the world to “advance knowledge, promote understanding, and serve society,” goals she hoped they’d advance. She also added a personal farewell to the students and wished them luck.

Bowie said that though departing Harvard will be tinged with sadness for the students, they are embarking on an exciting journey. Although the closeness of House life will be gone, the students will become part of an alumni network that spans the world and can prove helpful virtually anywhere.

The Ames Awards, given annually to the man and woman who have dedicated themselves to service, this year went to Talya Havice, who took a leave from Harvard in 2001 to join the Marine Corps and who was commissioned a second lieutenant earlier in the afternoon, and Adam Travis, who worked tirelessly for the Harvard Square Homeless Shelter.

Amanpour, who got her start at then-fledgling CNN in 1983 after graduating from the University of Rhode Island, urged students to take risks and work in some field that they’re passionate about, that will spur them to work hard, and increase their chances of becoming successful.

“Mastery, mission, purpose: Those … were my greatest motivators,” Amanpour said. “Right now, I passionately wish for all of you to find something that sets you on fire, that fills you with joy, and love, and commitment.”

Despite the economic difficulties now facing journalism, Amanpour said, there is still as large a need for quality, professional journalism as ever. Amanpour called journalism “a public trust” and a critical element of democracy.