Bench pressing for a cure 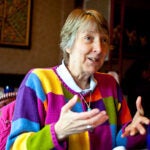 There’s nothing like hitting the gym to help find a cure for breast cancer.

On May 3, more than 250 Harvard athletes from 18 varsity teams took the Palmer-Dixon Gymnasium by storm for the second annual Bench Press for Breast Cancer Challenge, pumping iron and raising greenbacks for Susan G. Komen for the Cure.

In both a challenge of strength and fundraising vigor, the Student Athlete Advisory Committee (SAAC) invited the entire Harvard athletic community to come together to raise awareness and money for breast cancer research.

“We tried to get as many people out here as possible, and it was a really good turnout,” said Brent Suter ’12, community service co-chair and pitcher/outfielder for the Harvard baseball team. “We’re looking for more things like this in the future.”

Started only a year ago, the event has nearly raised $10,000 in its two-year-existence and is gaining momentum.

Melissa Schellberg ’10 of the Harvard softball team, who started the event last year as service chair, remarked, “It’s just so awesome that it started out as an idea on paper, and it manifested into this. I think this event is important, not just for the money but also for awareness. My mom was diagnosed at 32, and I’m 22 right now. … It’s very personal, and I’m really happy Harvard could come together and do something for it.”

The Monday afternoon event drew the student-athletes, despite the finals and papers that stood looming over them.

Max Eliot ’13, a member of the community service committee and utility man on the Harvard water polo team, noted the sacrifices those in attendance made to be a part of the competition. “I have papers I should be writing, and finals I have to be studying for, and so does everybody else,” he said. “This is a great cause, and a great event, and people still came out to support it, even during finals.”

Kathy Delaney-Smith, women’s basketball head coach and breast cancer survivor, attended to support the cause. “When I was in college, I was clueless. When I was diagnosed with breast cancer, I was clueless,” she said. “It means so much to me, because of my cancer history, to have young people, who have papers to write and exams to take, to come down here to raise money and do this … [it] means to me we are going to find a cure sooner than not. I just think this is phenomenal.”

The challenge, which requires three males athletes from each team to bench press half of their body weight and three female athletes to bench press the bar, saw the men’s ice hockey entrants take the men’s title, finishing the challenge with 217 reps. For the second straight year, women’s basketball won the title for the female athletes, dominating the competition with 298 reps. Caitlin Rowland ’12, who also won last year with 121 reps, repeated as individual champion, recording 138 reps.

“I feel so honored that my team selected me to represent us again. It means a lot to us, knowing how cancer’s personally affected Kathy in the way that she’s struggled and persevered through it,” said Rowland, who competed, strapped in a boot after suffering a stress reaction in her left foot. “I was a little nervous trying to come back and beat 121. The bar looked a little heavy today, but luckily I had a lot of team support. All the other teams were great, cheering me on and helping me get through it. It was a lot of fun.”

Although centered on fundraising, the event’s critical mission of spreading awareness and education contributes to its success.

“Being educated arms you to handle everything that comes your way better. I love pink shirt night. I love the whole campaign on all counts of awareness. It does a world of good,” said Delaney-Smith. “It’s not fun to get cancer, and it’s not fun to fight it, but it’s not nearly as bad as you think when you have awareness and you are educated. … Even at the grassroots level, it’s very important.”

For more information on the foundation, visit Susan G. Komen for the Cure.