The nature of reality 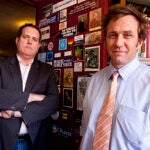 Rebels to some, achievers to others

Sekula uses art to portray ‘what it takes simply to survive’

A panel discussion with photographer/artist/essayist Allan Sekula quickly turned into a discourse on the nature of reality, a direction that fazed neither those presenting the conversation nor those listening in Emerson Hall.

Indeed, Sekula, who explores questions of capitalism, globalization, and social reality in a variety of media, characterized his approach as “realism in a time of lies” during a conversation April 28 with Homi Bhabha, the Anne F. Rothenberg Professor of the Humanities and director of the Humanities Center, and Benjamin Buchloh, the Andrew W. Mellon Professor of Modern Art.

As part of “The Church of What’s Happening Now” event sponsored by the Humanities Center and the Harvard Art Museum, Sekula showed clips from a film-in-process and discussed his seminal works such as “Fish Story,” an exhibit and book exploring maritime issues, “Waiting for Tear Gas,” about the Seattle protests against the World Trade Organization, and “This Ain’t China,” a riff on factory work.

Sekula’s work “resists nostalgia and heroism in an attempt to portray the quotidian horror of what it takes simply to survive,” Bhabha said.

In his remarks, Sekula noted with horrified glee the President George W. Bush-era attacks on the so-called “reality-based community.” He asked, “What does it mean that we live in a culture that thinks it can bomb peasants into modernity?”

Reality is even an issue within art world. “One of the problems of the latest in modernism is the suppression of realism,” Sekula said. “And yet there is another reading of modernism which allows us to see realism as a kind of marginalized and potentially subversive strand within modernism.”

Now based at the California Institute of the Arts, Sekula, the recipient of a Guggenheim fellowship, began his artistic career within the conceptual art movement, which is now much derided.

“As much as you attack, contest, criticize, and denigrate that legacy, I think it is still interesting for us to think about that exchange moment from which you emerged in the late 1970s,” Buchloh said. Sekula, he noted, was among those who “redefined the history of photography in terms of our thinking on photographic representation.”

Buchloh particularly cited the artistic performance by Sekula in which he threw stolen raw steaks onto a busy California freeway. Also, Bhabha told Sekula that raw meat or rawness “seems to be a real motif of your work.”

Sekula seemed to regard the meat incident as an act of juvenile exuberance, an effort to create a “profane act.” But, he added, he recently saw the movie “The Wrestler,” and was struck with how the broken-down fighter played by Mickey Rourke said, “I’m just a used-up hunk of meat. The film is really about that.”

Seeing in the audience Robin Kelsey, the Shirley Carter Burden Professor of Photography and director of graduate studies in the History of Art and Architecture Department, Bhabha invited him onto the stage. Kelsey asked Sekula why he moved away from still photography into filmmaking.

Sekula said that he had to switch to film to capture what he was witnessing. He found that he could not, for example, capture the frenetic nature of a particular Japanese fish market with still photos. “I borrowed a camera and read the manual at 1 in the morning, and I started filming at 3 in the morning.”

An audience member, Coco Segaller, a student at the School of the Museum of Fine Arts in Boston, asked Sekula to distinguish reality from among his work’s social, artistic, and political narratives.

Sekula, only half joking, responded, “You want an objective definition of reality?”

Segaller tried again: “What is the reality in the realm of conflicting narratives?”

But, he added, turning serious, “The biggest lie is the lie of marketization — that everything can be marketized.”

Bhabha singled out Sekula’s 2006 movie “A Short Film for Laos,” in which “very simple acts of survival, even transitional moments, are always so central.” Sekula’s work can be interpreted as metaphor on many levels, “yet somehow when you talk, people feel that it is much more object-driven or content-driven,” Bhabha said.

“Well, you should never trust what an artist says,” Sekula replied, to great laughter.